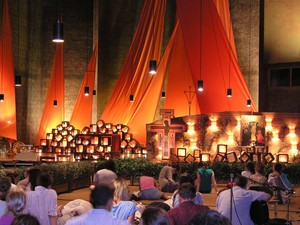 Ten years ago, Jason Santos was in his first prayer service during a research trip to the Taizé community, as a Princeton M.Div. student, when an unstable Romanian woman murdered its founder Brother Roger Schütz.

Santos, now the national director of UKirk—a network of collegiate ministries for the Presbyterian Church (U.S.A.)—is planning to take up to 12 campus ministers to the community in 2016 thanks to a $15,000 Funding Individual Spiritual Health (F.I.S.H.) Foundation, Inc. grant.

More than 100,000 young adults visit the ecumenical monastic community in France every year for contemplative prayer, Bible study and communal work, which has long fascinated Santos.

While working on his M.Div. and Ph.D. at Princeton Theological Seminary (2003-2010), he taught the Taizé class for each of the three years the seminary sent students there, also thanks to generous support from the F.I.S.H. Foundation.

When he began his work at the Presbyterian Mission Agency in October of 2014, Santos reached out to F.I.S.H. president Dr. Kathy J. Nelson to see if sponsoring a campus ministers’ trip was possible.

“He wanted to do something like we’d done at Princeton,” says Nelson. “He’s done such thoughtful work on the community, it made sense to us, we think it’s a great way to support collegiate ministries in the PC(USA).”

Nelson believes the Taizé experience will help campus ministers who are struggling with how to best meet the needs of students here, who have grown up in a post-Christian culture.

“The Taizé community shows how faith can be addressed for people of a younger generation, including those who have no church upbringing,” she says. “We want our campus ministers to experience this, to see what might be applicable to their context, in reaching young adults here.”

Being in the church when Brother Roger died—sitting only 30 feet away—had a profound impact on Santos.

“After those first two weeks I longed to stay,” he says. “I wanted to go back.”

Santos returned to the community four more times.  After his third visit he wrote the book, “A Community Called Taizé: A Story of Prayer, Worship and Reconciliation” (IVP, 2008).

He finished his doctoral dissertation following two additional trips, focusing on what happens to the young adults, as spiritual pilgrims, after Taizé. It’s the subject of his second book, “Sustaining the Pilgrimage,” to be published by IVP Academic in 2016.

Applications for the Taizé grant, which will cover half of the expected $2,200 cost of the eight-day trip in May or June of 2016, will be available in January when the F.I.S.H. Foundation, Inc. grant money is released.