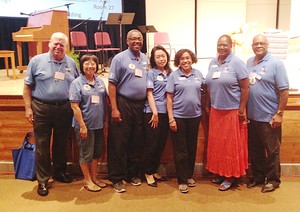 Incidents of racially charged violence across the country—from Ferguson to Baltimore and in many other cities in between—and the public reaction and outcry for justice that followed each have once again brought to light underlying racial tensions that continue to exist in American society.

This week at the Big Tent 2015 Conference held in Knoxville, Tenn., the Presbyterian Church (U.S.A.) officially launched the #SpeakAntiracism campaign. The campaign is a churchwide effort to recommit Presbyterians to racial justice and faithfully proclaim that the lives of people of color matter.

“Disparities still exist in our nation and in our church for racial ethnic persons, new immigrants and for many women,” said the Rev. Dr. Rhashell Hunter, director of Racial Ethnic & Women’s Ministries. “We hope that this campaign will highlight the need for individuals and groups in the Church to embrace God’s call to live as a beloved community.”

“This campaign affirms the Black Lives Matter movement, and will work to raise awareness of institutional racism in our society and the church. Awareness is the first step in working to break down barriers that still exist for so many,” she adds.

With the launch of the campaign, Presbyterians from different cultures and backgrounds are coming together to commit to work to end racism.

“We’re encouraging Presbyterians to take action, and offering some suggestions to get them started,” said Sera Chung, associate for Gender and Racial Justice in Racial Ethnic & Women’s Ministries. “They can engage with us on Twitter and use the hashtag #SpeakAntiracism to follow along with and participate in conversations about institutional racism, or they can pledge to schedule an antiracism training in their church or community. We’re also encouraging people to explore other learning opportunities, like the White Privilege Conference, and consider writing to their congress person to let them know that issues of racial justice are important to their constituents.”

Tags: antiracism, ask me why you matter to me, big tent, knoxville, racism