“There are some things we’d like to stay dead—and a real discussion on racism is one of those things,” says Alonzo Johnson, a mission associate for the Presbyterian Peacemaking Program. Johnson and his colleague, Blake Collins, a mission engagement specialist and young adult volunteer with the PC(USA), used the story of Lazarus to frame their workshop on how congregations can address racism at the recent Big Tent conference held in Knoxville, Tenn.

“This presentation is similar to the Lazarus story in that we’re going to unwrap things that are unsavory and things that don’t make us feel so good,” Johnson told the standing room only audience.

The presenters used the backdrop of “celebrations” at the University of Kentucky, where students have a history of taking to the streets when their basketball team wins—or loses—a championship game. They juxtaposed images of young, white students overturning cars and lighting couches on fire against video of “riots” in Baltimore, Md., and Ferguson, Mo., respectively, when “angry mobs” took to the streets to voice displeasure over police violence directed toward black men. Each instance involved the destruction of property and a heavy police presence outfitted in crowd-control gear, yet the media narrative was markedly different for each example. In one, raucous students are forgiven for acting out a relatively harmless alcohol-fueled moment, while Baltimore and Ferguson protesters are labeled dangerous “thugs” and “criminals.” 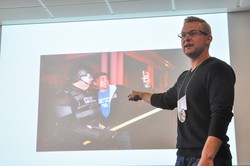 “We posit that riots, protests and student celebrations are defined by the majority of the people that are there, not by the presence of police or the actions behind the event,” says Collins. “We’re pre-programmed to accept a fight within NASCAR as just ‘good ol boys’ having fun, yet two black NBA players fighting would be labeled ‘thuggish’ behavior.”

Johnson and Collins challenged the participants to be aware of the racism that surrounds them, not only from the media, but within their communities and personal beliefs as well. Part of the solution to overcoming racism, which is not always overt according to Johnson, is collaborative peacemaking. Some of the spiritual assets that churches currently possess can be used to address and combat systemic racism. These include:

Bible study/education – Unwrap the issues by digging deeper. Invite others to gather together around issues and create safe spaces for learning about structural racism;

Worship – Utilize worship as a way to address race and reconciliation. Remember that “church is a performance of embodied hope,” according to Shannon Craigo-Snell. Involve youth from different churches or perform joint worship. Enact a Justice Sunday;

Leadership – People are resources and have connections and power outside the church. Be aware of how we can help each other. Serve and care for the resources in which you have been blessed; and

Koinonia – Communion and community; find ways for other churches, neighborhood organizations, schools and other faith communities to strengthen your community bond. Seek out PC (USA) ministry departments for guidance if needed.

“We have to be collaborative,” says Johnson. “If we don’t we will die and not be heard, and you don’t have to tackle this alone.”

Johnson suggested using the Civil Rights movement as inspiration. He spoke about some of the tenets of that model, specifically mentioning that churches and individuals should be expansive and inclusive, persistent, educated and informed, well-networked and organized, and have a powerful sense of spirituality.

Who are the people in your neighborhood?

What changes have you seen taking place around you?

What prevents you from building better relationships amongst those that surround your neighborhood, network, and other churches? Is it fear of difference or rejection?

Do you or your church only build relationships with those that enter the church on a weekly basis?

In 1980, the 192nd General Assembly adopted Peacemaking: The Believers Calling that, in part, reads:

“As Christians we must decide what we are called to be and do in the light of new awareness. We are not doomed to be imprisoned in fear, insecurity, greed, pride and cynicism that reflect our past. Our Christian faith can free us from such chains…A truly new age and quality of life for all people on this globe are possible. Such a new age we believe to be the will of God now.”

For more information or resources on collaborative peacemaking, visit the Presbyterian Peacemaking Program web page or contact Alonzo Johnson at Alonzo.johnson@pcusa.org or Blake Collins at blake.collins@pcusa.org.