Leaders call for the church to step up and take action 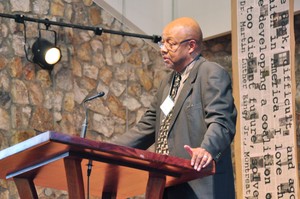 Fifty years to the day after the Rev. Dr. Martin Luther King Jr. spoke at Montreat Conference Center, more than 900 people gathered in Anderson Auditorium to celebrate the historic visit and take up King’s unfinished agenda. An opening plenary and evening worship service energized the crowd with inspirational music and moving messages. Dr. Tony McNeill, director of worship and arts at the historic Ebenezer Baptist Church in Atlanta led the music.

Richard DuBose, president of the Montreat Conference Center reflected on King’s historical appearance despite strong opposition at the time.

“It was a grace-filled occasion, one of the most important events in this community and pivotal in the life of the Presbyterian Church,” he said. “If we’ve made progress since 1965, we certainly realize there is still a long road ahead."

During the opening plenary and evening worship leaders told those in attendance that the time for standing silently by has passed. Noted author, columnist and speaker, Leonard Pitts, Jr. said people have “mastered the art of not seeing what is right before them.”

“There has been progress, but there is still much work to do and the church must lead the way. Trevon Martin, Jordan Davis, Walter Scott and so many African American women and men have paid a price and when you hear the hate-filled rhetoric, you realize that we are nowhere near where we ought to be,” he said. “Some of us find it a pressing and depressing reality and too many of us are denying it outright or disregard it with a disappointing lack of urgency.”

Pitts said people in this country suffer from willful ignorance, choosing not to understand the racial tensions that exist.

“People have a vested interest in not knowing certain things,” he said. “If people choose not to know about something, then all of the talking is a waste of time. If the likes of us are so off putting that we have to be shouted down, then we are all condemned to the silence that encompasses moral cowards.Pitts described the progress toward social justice as being on a road trip from Miami to Seattle. He believes we have stopped somewhere in the middle and are waiting to get started again. 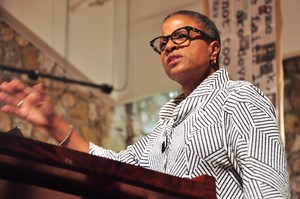 The Rev. Dr. Yvette Flunder, founder of City of Refuge United Church of Christ, brought the evening message telling the crowd that if they truly wish to follow Jesus Christ, they will have to “take a front row seat on the front line of struggle.” She warned that taking up Christ’s call does come with a price.

“When you leave the mountain, make sure you ask God to reveal his purpose. Find your purpose and stay with your purpose, no matter who you keep or who you lose,” she said. “The time has come and gone for a religion that just gets along with everyone. There are going to be people who don’t like you.”

Flunder said it is time for the church to be reconciled but it won’t happen until people repent.

“We must repent as a nation, as a church, as missionaries and as people, openly and wholly,” she added. “We are the voice that ought to be on the front lines of the peace movement. Christ lost everything on purpose for a purpose. The more you follow Him, the more you will find purpose and speak the truth to power, the more you get in harm’s way.”