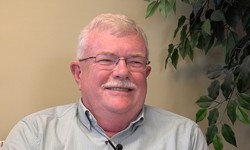 The Rev. Gradye Parsons, stated clerk of the Presbyterian Church (U.S.A.) General Assembly, announced Tuesday that he would not stand for election to a third four-year term as the highest elected officer of the church.

Parsons, ordained 36 years ago as a Presbyterian teaching elder, says his first job in the church was as a janitor. “It’s been a privilege for me to serve,” he said of his tenure. “All of my jobs in the church have been a pleasure to me.”

In his announcement, Parsons said the church “has entered into a new chapter of its common life,” and he reflected on aspects of this new era in an interview with Presbyterian News Service.

“One of the biggest changes is the number of women who are teaching elders,” he says of the differences between the church into which he was ordained and today’s. “We only had one woman, in those days, at one church who was an installed teaching elder.”

He also points to other changes such as attitudes about worship and formality in church. “When I was first ordained, Sunday morning was at least shirt and tie—minimum. Not so much anymore,” he says. “We’re on the third hymnal since I was ordained.”

“When I go out to talk to congregations, and I try to do that as much as I can, [what I saw then and what I see now is] people trying to live out their faith and meet today’s world,” he says of the similarities over time. “People are trying to learn more about the Bible.”

Another similarity, he says, is a focus on how to retain and attract young leaders in the church. Citing conversations with author Brian McLaren, Parsons believes young people care about making the world a better place. He says the PC(USA) is a church in which these opportunities exist.

“They care about justice, they care about the environment, they care about all people,” he says. “The Presbyterian church is about that; we’ve been about those issues for a long time so we sort of have the apparatus for them to come get involved. . . . Part of it is we have to be willing to not require them to start at zero, but to really full engage them from the get-go and listen to what they have to say.”

Questioned about the timing of his departure—in the wake of controversies surrounding inclusion of LGBT clergy, same gender marriage, the BSD (boycott, sanctions and divestment) movement, and other leadership issues—Parsons points to his contentious first call as a pastor, saying, “I made a conscious decision not to run away then, and I’m not running away now.”

He’s hopeful, even as many churches have departed the PC(USA) over the issue of LGBT inclusion and same-gender marriage, that the church will continue to be a place where a diverse range of theological positions can exist.

“I grieve every congregation that has left,” he says. “I think we’re less because of that. I think they’re less because they aren’t part of us. . . . A lot of folks are making the decision to stay because, even though they may not agree with what’s been done, they know they can still live their congregational life the way they want to.”

Looking to issues the church will encounter in the near future, Parsons feels inclusion, privilege and a just response to immigration are the most pressing concerns.

“I hope the church takes seriously this moment in time to deal with our own white Presbyterian privilege,” he says. “That’s part of the problem. [We need to] give that up so everybody can have a fair chance.”

He continues, “Immigration is a theological issue. The Bible is very clear about how you treat ‘the alien.’ Even Jesus Christ himself was an undocumented immigrant in Egypt. We have to take it as a serious matter for us.”

“We’ll continue, as we always have as Presbyterians, to wrestle with what does God’s word say to us today and how do we read it, how do we listen to it,” he says.

Looking to the future of leadership in the church, Parsons describes himself as an “explorer-pioneer.”

“I think we need some ‘settlers’ now to help define what this community is, now that we’ve gone through these long discussion and debates about who we are as a church,” he says.

“Whoever gets to sit in the big chair after me, I hope feels the same sense of honor and support and encouragement I get every day,” he says of the person who will follow him as stated clerk. “There are more good emails than bad emails, and I hope they get to enjoy that too.”