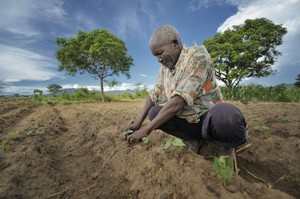 Nerbert Pasidya Mkandawire, 63, encourages his bean plants in Malawi. The country has endured drought and flooding during the crucial planting and harvest seasons. The difficulty of crops surviving these crises has led to food shortage throughout the country. —Paul Jeffrey, ACT Alliance

The Presbyterian Church (U.S.A.) is describing the unfolding food shortage in Malawi as critical, urging Presbyterians around the world to pray and support efforts to help people in need. As a result The Malawi Mission Network, Presbyterian Disaster Assistance and Presbyterian World Mission are calling for a Day of Prayer and Fasting on World Food Day, Friday, Oct. 16, followed by a Day of Action on Sunday, Oct. 18, to collect contributions for food aid.

“The situation is desperate,” said the Rev. Debbie Braaksma, Africa area coordinator, who, along with Nancy Collins, regional liaison for Presbyterian World Mission, traveled throughout Malawi this past week.  “As the body of Christ we need to stand by our sisters and brothers to support them as they seek to be the hands and feet of Jesus to respond to the hunger crisis unfolding in their midst.”

Braaksma and Collins traveled in all three Malawian synods of the Church of Central Africa Presbyterian to see and hear about the devastation firsthand. “What we saw and the stories we heard were very sobering,” Braaksma said. “Now is the time for Presbyterians to respond through sacrificial giving to prevent a large scale loss of life in Malawi.”

Jim McGill, PC(USA) mission co-worker in Malawi, recalls in January 2015 the rain just kept coming and coming. “The worst areas for flooding were in Blantyre and the Shire Valley in the south,” he said. “Close to 200 people were killed and about 200,000 people were displaced.” 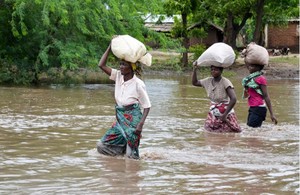 During the intense flooding, the Synod of Livingstonia Development and Relief Department worked with Action of Churches Together (ACT) and Churches Action in Relief and Development (CARD) to provide 500 household water filters to the areas where the need was greatest, as determined by CARD.

“CARD asked for the filters to be delivered to the village of Osiyana on the East Bank of the Shire River,” McGill said. “Access to the entire East Bank was cut off due to roads and bridges being washed away, so the only way to get to Osiyana was by helicopter.”

A private company McGill helped train, as part of his work with the Church of Central Africa Presbyterian, delivered the filters to families in Osiyana and trained these families in how to use and maintain the filters. The owner of the company told McGill it was fulfilling for his company to be able to provide relief services and safe water to people in need.

Frank Dimmock, PC(USA) catalyst addressing the root causes of global poverty, said between now and  March many households will be in crisis because of projected food deficits. Heavy rains and floods in the south have washed away many homes and crops. Drought throughout the country has reduced harvest yields, leaving the nation in a serious food crisis. “Food prices are already 50 percent higher than the five-year average,” he said.

“Our agriculture season begins in October and continues into March and April with harvest. But the flooding and drought that followed have effected close to 2 million people who will not have the food entitlements they need,” said Melton Luhanga, executive director of CARD, the lead agency of the Malawi Act Forum.

“We call upon those around the world who are interested in what is happening, along with our colleagues in ministry to respond to this plight in our country,” he said. “This is a complex situation and we find many without homes—sleeping in tents or outside. They need all of us worldwide to intervene.” Of the 27 districts in Malawi, Luhanga said 19 were affected with southern Malawi being the hardest hit.

“Many of the families in the village of Pensulo were living in tents that they moved from their school compounds to their ravished homesteads,” Braaksma said. “They were faced with the cruel choice between rebuilding their homes so their children would have a decent place to live or to buy food that is becoming less available and more expensive.”

McGill visited a grandmother living near Loudon Mission Station, Embangweni, just after she had harvested this year’s crop. “She needs about 75 bags of maize [corn] to feed all the people she supports, and normally her fields produce between 100 to 120 bags,” McGill said. “This year, however, her field only produced nine bags of maize.”

Braaksma and Collins visited with a grandmother caring for her two orphaned grandchildren. They had no food to feed the children who showed signs of serious malnutrition. “We visited the family around noon and the children had not eaten since noon the day before,” said Braaksma. “She didn’t have anything to feed them that day.”

Working with the ACT Alliance, Presbyterian Disaster Assistance has partnered with the Church of Central Africa Presbyterian to distribute food to those most in need, using information supplied by the ACT Malawi Forum. The forum assesses need by region and provides monitoring and evaluation through onsite visits, as well as a peer mechanism process to ensure mutual accountability. Food items, such as maize flour, beans and cooking oil are distributed, with special attention given to pregnant women, children under age 5, and persons with disabilities and chronic illnesses.

According to the Famine Early Warning Systems Network, the food security outlook in Malawi for October through December 2015 is in the category of stressed or crisis, especially for poor households.

Financial support can be provided through Presbyterian Disaster Assistance online, or by mailing a check to Presbyterian Church (U.S.A.), P.O. Box 643700, Pittsburg, PA 15264-3700. Donations should be made as quickly as possible and designated to PDA Fund DR000158 for urgent assistance to Malawi and Southern Africa.

Leadership of the Malawi Mission Network, Presbyterian Disaster Assistance and Presbyterian World Mission has issued a call to a Day of Prayer and Fasting for the people of Malawi on World Food Day, Friday, October 16, followed by a Day of Action on Sunday, October 18 to collect contributions for food aid. The network has compiled a devotional guide and guidelines for fasting for use by churches, presbyteries and agencies.