Group credits Self-Development of People for helping jumpstart its efforts 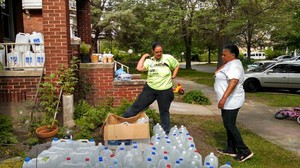 An organization fighting to provide water and other services to Detroit’s poor and elderly credits the Presbyterian Committee on the Self-Development of People for helping get its efforts off the ground. “We the People of Detroit” is a grassroots initiative formed in 2008 to fight city government’s takeover of the public school system. Over the years, its mission has grown to improve the quality of life for city residents, focusing on such issues as workers’ rights, pensions and ensuring people have access to clean water.

Group leaders said they found mothers knocking on doors seeking water for baby formula and people who had been living without water for lengthy periods of time. We the People of Detroit has worked to prevent water shut-offs that and SDOP has stepped in to assist.

“This partnership couldn’t have come at a better time,” said Monica Lewis-Patrick, co-founder of We the People of Detroit. “It allowed us to be catapulted into action and led to our involvement in water litigation and the drafting of state and federal legislation.”

In 2013, Detroit filed for Chapter 9 bankruptcy, with an estimated debt of $7 billion. The city continues to work on its recovery while thousands of people remain out of work and struggling to meet their daily needs.

“We’re going into communities where water has been turned off in an effort to force people out of their neighborhoods,” said Lewis-Patrick. “We’re seeing waste, garbage and sewage. We’re knocking on doors of people in their 70s and 80s with physical ailments who don’t have water.”

We the People of Detroit has been working with 128 nationwide attorneys under the leadership or Alice Jennings, Esq., on litigation in hopes of ensuring a basic minimum standard and access to clean, affordable water. 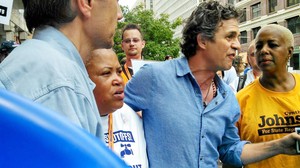 Monica Lewis-Patrick and Actor/Activist Mark Ruffalo at the “Turn the Water On” march in Detroit. —Photo courtesy We the People of Detroit

“Many of us working with We the People of Detroit were either downsized from our companies, faced with a threat of foreclosure or had our water cut off,” said Debra Taylor, co-founder of We the People of Detroit and director of finance and development for the group. “We were fighting for the greater good but experiencing personal crises ourselves. The infusion of support from SDOP gave hope to our people.”

Taylor and Lewis-Patrick both say water rates have increased more than 123 percent in the the last two years while nearly 50 percent of the city’s population is out of work.

“SDOP established us in such a way that we hope to reposition ourselves to attract more resources. The ministry has validated our work,” said Taylor. “We hope to stabilize the organization so we can stabilize some of our members and volunteers.”

Initial grant funding has allowed We the People of Detroit to provide a centralized base of operations.

“We had been working in homes and cars,” said Lewis-Patrick. “SDOP helped us get office space that was essential for training and meetings. It provided us a central location for the receipt and distribution of products and water.”

September marks the 45th anniversary of SDOP’s creation. Since its inception, it has awarded more than $100 million to communities of economically oppressed people in 67 countries including the U.S.

“We wish there was no need for ministries like this, but the need is greater than it’s ever been,” said Cynthia White, coordinator for SDOP.

The Rev. Curtis A. Kearns, a former SDOP national committee member calls the ministry a unique initiative with a desire to stand in partnership with communities in need.

“SDOP is one program that helps us provide a forthright and bold domestic presence, going into rural and urban communities in need of help,” he said. “But SDOP does not go into a community telling people what they need. The citizens know what best to do.”