No longer ‘the quiet, withdrawn one’ thanks to art, storytelling studio 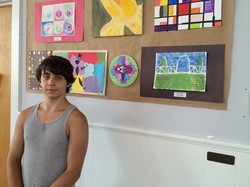 For 15-year old Chris Omelchuk, Beacon—a new church development under the umbrella of the Presbyterian Church, (U.S.A.) and a designated 1001 New Worshiping Community—has been a godsend. Growing up in a post-industrial neighborhood in Philadelphia, Omelchuk was struggling in middle school with issues of bullying. He was being teased and made fun of, being told things like “you’re a fruit.” Then he discovered Beacon’s after-school program.

“It kept me from being drawn in by the instigators who wanted me to fight them," he says.

Thanks in part to two years of participation Beacon’s Studio art and storytelling focused program, and hanging out with kids in the neighborhood during summer months at Beacon, Omelchuk is in a much better place.

“This year is kicking off well, like a continuation of my freshman year, which I loved,” he says. “Beacon has helped tremendously.”

What Beacon does with students in the Studio is a sort of group art therapy session, but with an artist and pastor as teacher. There’s a broader benefit too: students get to make something next to another person in their neighborhood, with opportunities to bond through storytelling.

“I’ve seen this work in all kinds of populations, across all kind of demographics,” says Beacon co-director and pastor, the Rev. Rebecca Blake. “By making something beautiful and knowing the person next to them, they leave here feeling empowered.” 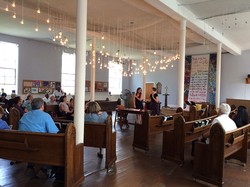 Co-pastors Rebecca Blake (left) and Karen Rohrer (right) in Beacon’s sanctuary that features ‘rolling pews’ and 150 hanging light bulbs—a nod to both the neighborhood’s industrial legacy and the church’s history: they cast light out both sides of sanctuary and into the street. —Kathy Francis

Omelchuk credits Beacon and his parents for helping him better understand his homework and, as an extension, what was going on in the classroom. As a result he’s no longer the quiet, withdrawn one, in the back.

“I’m much more comfortable speaking in public, so I’m upfront now,” he says, with a soft laughter that conveys a sense of wonder. “I used be really jittery, but Beacon helped me overcome fear, by working on my social skills.”

Beacon began as New Church Development in 2012 creatively using the space of what was Beacon Presbyterian Church—a mission church started in the 1870’s. In 2010 the Presbytery of Philadelphia approached the original church, which was struggling to keep its doors open, to allow a new ministry to be formed. Grounded in the arts, the new Beacon would create an alternative way of doing mission and worship in a neighborhood facing rising unemployment rates from industry leaving.

With creative approaches to programming, worship and sustainability, Beacon has fully utilized its front yard as a community space, with an unusual feature in a densely populated city, which was created after the 1880’s-era dome was destroyed by a hurricane in the 1950’s.

“The original Beacon congregation chose to invest in programs for the community as opposed to the building,” says Blake. “As a result, what had been a beautiful sanctuary, but would now, if it had remained be impossible to heat and maintain, has become the only green space in a quarter-mile of tight urban row houses.”

That yard has become a connecting place, welcoming neighbors of all backgrounds and classes, young, old, rich, and poor into a community where their stories are heard—and faithful caring for one another happens.

“Our vision for Beacon was to be good to news to the surrounding community, regardless if they ever joined us in worship,” says the Rev. Karen Rohrer, Beacon co-director and pastor. “We also wanted to chart a path for church sustainability in a neighborhood unable to fund a church solely with pledged giving.”

The impulse to be good news to all has connected Beacon to sustainable volunteer and monetary resources, which has put them in position to have conversation with their Presbytery about becoming the newest chartered congregation in the PC(USA). If all goes well, Beacon hopes it will happen by the end of the year.