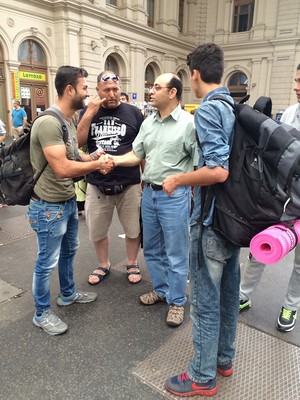 While meeting in Lake Balaton, Hungary, the first week of September for a Presbyterian World Mission conference themed “The Church without Walls,” news broke that thousands of asylum seekers, most from the Middle East, had crowded into Keleti train station in the heart of Budapest, and that the station was closed.

A crisis was occurring only a two-hour drive from where we were meeting. We discussed this in the context of our theme at the conference. Upon returning to Budapest for our continuing travel, my colleague and I were compelled to visit Keleti to see if we could meet some of the people stuck at the station and hear their stories.

“We have train tickets to a city near the border of Austria, but we don’t know if we should take the train,” one explained. Their appearance—jeans, athletic jackets and backpacks—belied their asylum seeker status, but their wide eyes showed their fear and uncertainty.

“We are worried that police will take us to a refugee camp when we get there, and we don’t want to do that again,” said another.

Three young men, possibly in their teens, stood by the steps when my colleague Amgad Beblawi approached them. Amgad is Egypt-born and raised, now a U.S. citizen serving as Presbyterian World Mission area coordinator for Europe and the Middle East. He had greeted them in Arabic, asked them their plans.

“What do you think we should do?” they asked.

Amgad turned to a man climbing the stairs from the station.

“Do you speak English?”

“Yes, of course,” said Denis Lionnet, a French-born citizen of Budapest, followed by his wife, daughter and a few friends. The group of people helping the asylum seekers grew in number. They spoke in Arabic, English, French and Hungarian, and used several smart phones to communicate.

Proceeding to the platform, the diverse band found the departure times to various destinations on sheets of paper taped to the frame of the electronic sign. The schedule was scrawled in red and blue magic marker in Arabic and English. There was not much in the way of official assistance occurring at Keleti station the day we arrived.

Others pressed in with questions.

“Which train will take us to the border? Do you think it’s safe to take it?”

Amgad, Denis, and a few others spent an hour helping people from Syria, Iraq, Iran, Afghanistan and northern Africa find the trains listed on their Hungarian tickets.

Below the platform in the bowels of the city, asylum seekers who had run out of money waited for direction, for inspiration, for something they could trust that would help them leave again. Hungarian police quietly patrolled the area while local volunteers with little ability to communicate offered food, water, clothing and blankets to men, women and children. Hundreds of families had made dwelling spots on the tile floor of the underground station. Children made crafts and played pick-up soccer with young adult volunteers in the open space of the station. 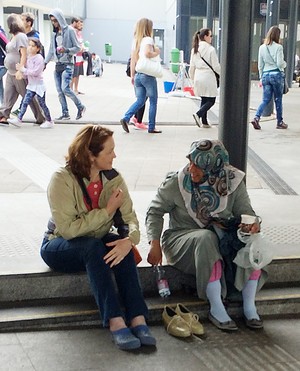 Michelle Lori meeting with a Syrian woman resting on the curb at the Keleti train station in Budapest. —Amgad Beblawi

We asked several exhausted young men from different places in Syria what made them decide to leave.

“We stayed as long as we could, but the fighting and the presence of ‘Daish’ (ISIS/ISIL in Arabic) in the area finally drove us to leave,” a man in his late 20s answered.

“We hear that Syrians are being given visas because we are seen as true refugees, but we aren’t sure about people coming from other places,” one of them added.

They asked us what we thought they should do. We said we didn’t know. We assured them that we are praying for them, that many are praying for their safe passage. As we left, we heard one say to his friend, “If you are scared we will stay here, and wait until they send a bus to take us.” And the reply, “But is there really hope that they will take us in a bus [to the border of Austria]?”

A mother who looked to be in her 30s, sat wearily amid a pile of blankets, plastic bags of food and clothing supplies as her five children, ages 3 to 15, played around her. We asked to speak with her, and she invited us to sit. We asked her how she and her family were doing.

“This is how we’re doing,” she said as she gestured to her surroundings. “It has been a struggle for the past 15 days. I don’t want to talk about it because it will just make me cry. We had tickets to the border, but when we boarded the train, they wouldn’t let it leave. We sat on the train for two days without food or water, and finally had to get off.”

On Sept. 3, thousands of asylum seekers decided to walk to Austria when the station shut down. Those we spoke with in the underground concourse waited for transportation opportunities.

As we sat with this young mother, several volunteers came by offering sandwiches, cookies, bottles of water and toys or snacks for her children. She politely refused but her children accepted some of the offerings. We learned that she is Kurdish, from the border region between Syria and Turkey. We asked where they are headed. She wants to take her children to Germany because “they are all smart, and they will get a good education there.” Her 15-year-old son told us he wants to be an engineer and flashed a winning smile.

Occasionally, a gregarious traveler walked among the blankets of family groups shouting in Arabic, “Get up! Come upstairs to the entrance! If we all go upstairs, they will bring buses to take us!” The people mostly ignored them, some waving them off. As well, some soft-spoken Hungarians walked through assuring families that vans would come soon. But whether or not this was true was just as much a question. 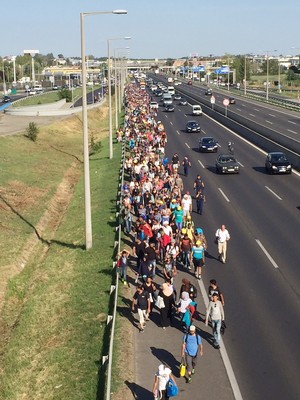 Younes, a 15-year-old Afghani boy who lived in Iran, played soccer regularly until their journey began two months before.

“My parents decided to leave Iran for us [their children], not for themselves. They want to take us to Germany.” We asked him to describe his journey so far. “We got on a boat in Greece, but the boat started to capsize. Several of us tried to bail the water out until finally a ship came and rescued us. They took us to a refugee camp in Greece. We left there and walked for six or seven hours through a forest,” he said.

“We used GPS to find our way. Once we got to the border of Hungary, we came to a fence, so we walked along it until we met the police. They took us to a refugee camp in a van. There were tents, but they weren’t very clean. Police brought us here, but now we are confused what to do next. Do you think Germany will let us in? Which country should we go to?”

“Germany is pretty welcoming, as are Sweden and Norway,” Amgad offered.

A Syrian man in his 50s told us he’d been a police officer for the Syrian government. ISIS had beheaded his 22-year-old son. A woman with him, also in her 50s, told us they had spent six hours in the water when the boat they’d boarded capsized, until they were rescued by the coast guard in Greece.

Although there was little we could offer the people we met that day, we sensed that listening to their stories of struggle and survival, and assuring them of our prayers for them, may have provided a kind of spiritual sustenance as they pressed on.

We noted several Christians among the volunteers that day at the station. We spoke to two young students of a Bible school in Budapest who came to help clean up.

“They have lots of food and supplies. What they need now is the gospel,” one stated.

In reflecting on the conversations we had with the families and groups that waited at Keleti station, and observing the outpouring of grassroots support, Amgad said, “I’m trying to find something positive in all of this. Perhaps the fact that the Hungarian people are coming down here to the stations to give the refugees what food and supplies they can, even if they are unable or unwilling to converse with them, there is a chance they will see them, and begin to break down stereotypes of refugees as ‘the other,’ and it will be the beginning of a kind of compassion that can only happen by meeting people face-to-face.”

I visited an English-language church in Budapest called St. Columbo’s Reformed Church of Scotland for the Sunday, Sept. 6 morning worship service. The congregation launched “Salaam (the Arabic word for “peace”) Overnight Shelter” in cooperation with Kalunba nonprofit Kft and the Refugee Mission of the Reformed Church in Hungary. Beginning that Sunday, parishioners began visiting Keleti station daily to meet families, and offer overnight shelter to women and children who are the most vulnerable. An evening meal and breakfast is provided for the guests before they are escorted back to the train station. I watched the congregation walk together down the street toward Keleti station. I snapped a photo—church without walls.

When asked where she hopes to go, one Syrian woman said, “I don’t care where we end up, as long as we can get away from the terror happening in Syria.”