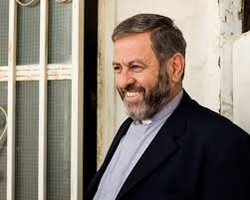 Syria has not known peace since March 2011 when Arab-spring inspired demonstrations for democracy quickly grew into an armed conflict. More than 300,000 people have been killed. Millions have fled. Tens of thousands of homes have been completely destroyed, including some entire cities. The economy has collapsed and, without electricity, much of the country is in darkness. The so-called Islamic State (ISIS/ISIL) is growing, as is the presence of foreign military advisors from several countries. Of the 23 Presbyterian churches in Syria, four have been completely destroyed and most have lost the majority of their membership through violence or immigration.

“We have passed through many wars, many crises, but they cannot destroy our faith. We are here because we have hope.” That’s the message the Rev. Fadi Dagher, general secretary of the National Evangelical Synod of Syria Lebanon (NESSL) brought to the Syria Lebanon Mission Partnership meeting at Louisville Presbyterian Theological Seminary.

The Syria Lebanon Partnership Network of the Presbyterian Church (U.S.A.) continues the long history of Presbyterian mission that began in 1823. The partnership network joins Presbyterians from around the U.S. to work in collaboration with churches and church-related ministries in Syria and Lebanon. The group’s priorities include supporting leadership development and theological education as well as working toward peace in the region.

Tim McCalmont, pastor of the Presbyterian Church of the Covenant in Costa Mesa, Calif., said Dagher has been an indispensable link and partner with the network over the past two years.

“We have been most impressed with the level of closeness he has fostered with the pastors and congregations of the Synod as he has led the shaping of the church’s respond to all the needy of the region, regardless of faith background,” he said. “We simply cannot do what we are doing in the area without his kind and experienced support.”

Prior to the current unrest, Syria was known as one of the most peaceful countries in the Middle East where a mosaic of ethnicities and religions lived together successfully for more than 1500 years. Protestant Christians are now a minority within a minority and NESSL’s focus has become primarily humanitarian aid and pastoral care for those who have fallen victim to the violence.

NESSL is working to rebuild church buildings destroyed during fighting and construct new facilities for congregations that relocated because of ISIS. The 600-member church in Damascus has been hit twice by rockets. A number of church leaders have been forced to flee and some pastors are leading as many as three congregations—several traveling within five miles of ISIS-controlled territory in order to serve the Christians who have remained.

For Christians not able to leave the regions ISIS is now occupying, there are very few options. Dagher knows one wheat farmer who has to pay a “jizha,” a heavy poll tax levied on those who do not accept Islam, which is also considered a badge of humiliation and punishment. Even though the farmer pays the tax he is not allowed to openly practice his Christian faith. His wife must be covered when she is in public. His only alternatives are conversion to Islam or death. Most Christians have fled the areas now occupied by ISIS, but the few who remain must all pay the “jizha” and abide by ISIS’s restrictions on non-Muslims.

The lack of educational opportunities for refugee children has also become a focus for NESSL.  Many children have not been able to attend school in 3-4 years and, because of language barriers and curriculum differences, Lebanon has been able to absorb only a small number of Syrian refugee children into its educational system. NESSL, along with its partners around the world, is working to open special schools for Syrian children, ages 4-11, in Bekaa Valley, where a number of refugee camps are located.  The schools would also provide some meals and medical assistance.

Dagher said higher education is an important part of long-term peace for the region. Many moderate Muslims graduate from the American University of Beirut and Aleppo College, both founded by the American Board of Foreign Missions and open to all, regardless of race or religion.

He said Christians in Syria remain hopeful. “They know the church is beside them, supporting them. They know they are not alone in this part of the world. We have Christian sisters and brothers walking beside us.”

Dagher asked for continued support and prayers from American Presbyterians. “We ask you to be our voice to the leaders of this country. With you, we are not alone and we can continue to hope that we will be back in our churches and our homes.”