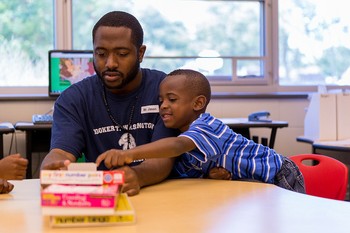 “It was created to reach, teach and invest in African-American boys at risk,” said Tracy D. Dace, a member of First Presbyterian and developer of the pre-K program. “Guided by the principles of social justice and educational best practices, the DREAAM Team designed a summer program to intervene and increase kindergarten readiness in the areas of math, reading, social emotional learning and school expectations.”

The summer program runs for four weeks at an elementary school in Champaign, a small urban community wrestling with a number of issues including juvenile delinquency, poor school outcomes and gun violence. But it is also the site of a major public research university, a number of social service providers and an active faith-based community.

Dace developed a vision for reaching boys at an early age in an effort to address the growing problem of academic underachievement. However, he adds it’s much more than just learning the basics. In addition to getting an early start on education, the boys also take field trips and learn about expected social and emotional behavior. The program was officially launched last summer.

“Expectations are high for kindergartners and many are simply not ready,” said Dace. “The range of readiness gaps at school entry differs across schools and communities. African-American boys with lower levels of learning and social skills than many of their peers are particularly at risk. The DREAAM House Summer Pre-K Academy focuses on increasing success in kindergarten and addressing the early developmental needs of boys at risk.” 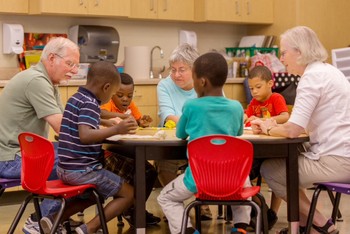 While it’s still too early to determine the long-term impact of the program, initial reports from local schools have been positive. Dace says teachers report significant progress among some of the DREAAM House participants.

“When I see the boys in the community or at school, they are excited about DREAAM and ask when they can go back again or what we are doing next time at the DREAAM House,” he adds. “Parents are very supportive, and our school superintendent has taken a keen interest in the program.”

Educators say there is a long list of children awaiting acceptance into early childhood education programs. The presbytery and other church leaders see DREAAM as a catalyst for other programs.

“The next step for DREAAM is to continue supporting the boys through a 4-H afterschool program, school-based mentoring and a Saturday sports program,” said Dace. “In addition, a parental component is under development to help them through advocacy and effective parenting.”

The Presbyterian Church (U.S.A.) has made education and poverty alleviation a priority. Working with partners in the U.S. and worldwide, the goal is to provide access to quality education for one million children by strengthening communities’ capacity to provide quality education, improve teacher training and resources and create a safe environment for children to learn.

Donate to the international campaign to address the shortage of well-trained teachers and to provide infrastructure, learning resources, access, safety and security at schools.