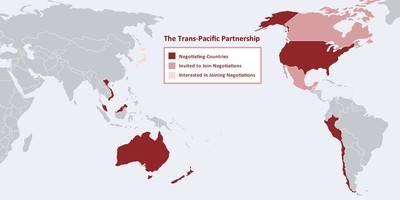 The Presbyterian Church (U.S.A.) Office of Public Witness and approximately 1,500 organizations are urging Congress to oppose the Trans-Pacific Partnership (TPP), a trade agreement they believe will hurt the American economy and low-wage countries around the world. The pact was reached in October among 12 Pacific Rim countries around a variety of economic policy issues. Supporters say it will promote economic growth with the creation and retention of jobs, improve productivity and reduce poverty.

In a letter to each U.S. representative and senator, the Citizens Trade Campaign argues the agreement poses “significant threat to American jobs and wages, the environment, food safety and public health.” The letter listed several likely effects of the TPP.

The letter campaign says the agreement will force U.S. employers into closer competition with countries that exploit labor like Vietnam and Malaysia “with workers legally paid less than 65 cents an hour and an estimated one third of Malaysian workers that are victims of human trafficking.”

“The TPP’s labor standards are grossly inadequate to the task of protecting human rights abroad and jobs here at home. The countries involved in the TPP have labor and human rights records so egregious that it is simply incapable of ensuring that workers will be able to exercise the rights promised on paper,” the letter said.

TPP opponents argue the agreement would allow countries to violate their obligations in key environmental treaties in order to boost trade or investment without consequences.

- Jeopardizing the safety of the food we feed our families

The Citizens Trade Campaign argues the agreement allows exporters to challenge border food safety inspection procedures. “This is a dire concern given the TPP includes countries such as Vietnam and Malaysia that export massive quantities of shrimp and other seafood to the United states, significant amounts of which are now rejected as unsafe under current policies.”

Opponents believe the TPP’s provisions would delay the introduction of low-cost generic medications, increasing health care prices and reducing access to medicine both at home and abroad.

“One class of interest – foreign firms – could privately enforce this public treaty by skirting domestic laws and courts to challenge U.S. federal, state and local decisions and policies on grounds not available in U.S. law and do so before extrajudicial tribunals authorized to order payment of unlimited sums of taxpayer dollars.”

The letter says the TPP agreement is the “all-too-predictable result of a secretive negotiating process in which hundreds of corporate advisors had privileged access to negotiating texts, while the public was barred from even reviewing what was being proposed in its name.”

"Any trade agreement that only focuses only on increasing profits for international corporate interests while ignoring fundamental issues like human rights, environmental protection and access to affordable medication is immoral and shows a blatant disregard for human life,” said the Rev. Dr. J. Herbert Nelson, director of the PC(USA) Office of Public Witness. “We must be a better nation by choosing trade policies that uplift humanity rather than endanger the lives of women, men, boys and girls.”

The 1,500 organizations listed in the letter believe Congress is left with no means of adequately amending the agreement without rejecting it completely.