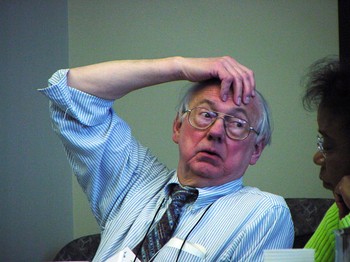 Bob Smylie, director emeritus of the Presbyterian Ministry at the United Nations. —Photo courtesy of the Advisory Committee on Social Witness Policy

For more than a quarter of a century, the Rev. Robert F. (Bob) Smylie was the Presbyterian Church (U.S.A.) eyes and ears at the United Nations. His passion for international relations work made him a valuable resource for the church over the years.

“Bob was one of the giants in the church. I learned so much from him and he was so wise,” said Sara Lisherness, director of Compassion, Peace and Justice ministries in the Presbyterian Mission Agency. “He was a theologian, an ethicist and there was no one better able to synthesize what was going on in the world and look at it through a reformed theological lense.”

Smylie was a graduate of Washington University in St. Louis and Princeton Theological Seminary. He also studied international relations at Columbia University in New York. In addition, he participated in the U.S. State Department’s Scholar-Diplomat Program and worked with NATO in a seminar program for religious specialists. He was a U.S. Navy chaplain, taught at the University of Florida as a visiting professor and the Ecumenical Institute of the World Council of Churches at Bossey, outside Geneva.

Close friend and colleague Dean Lewis interviewed Smylie for the position of International Affairs Associate in the Church and Society Mission areas of the program agency. Lewis, who served as Director of the Council on Church and Society, says he was hesitant to meet with Smylie because of his academic background.

“However, I decided to interview him because his application clearly indicated not only in-depth knowledge of the justice and peace dimensions of the current international issues, but a clear vision of what was needed to move toward solutions from a sound theological foundation,” Lewis said. “I never regretted offering him the position and was very glad he accepted. He became a dear friend as well as an exceptional colleague.”

The Rev. Mark Koenig, director of the Presbyterian Ministry at the U.N., first met Smylie at a Peacemaking Conference.

“His depth of knowledge and commitment to Christ impressed me immediately. Over the years, I came to appreciate how Bob’s combined understanding of international issues and the Gospel allowed him to make significant contributions to the life of the Presbyterian Church (U.S.A.) and the United Nations community,” he said. “It was my honor to represent the Presbyterian Mission Agency when Bob was recognized as director emeritus. His observation that the United Nations works for peace and security but the Church works for peace and justices echoes with me as I seek to follow in his footsteps.”

In September 2015, Smylie was interviewed for a series of stories surrounding the 70th anniversary of the United Nations. He strongly believed the church should have a presence in the U.N. community.

“I argued that if the church wanted to continue doing work at the U.N., there had to be an office in the city. It couldn’t be done in Louisville or anywhere else,” Smylie said, “The church committee working on the merger agreed. At that point, we opened an office near the U.N. at the Church Center. Methodist women, an organization within the Methodist Church, had acquired the building to be a center for Protestant groups working at the U.N.. I was privileged to remain behind.”

Smylie said there were always new challenges and opportunities to learn and grow in the ministry at the U.N., even at times when the U.N.’s relevance was questioned.

“All major countries at some point downplay the work of the United Nations. Countries like our own have ignored the U.N.’s recommendations and believe it is only good now for making speeches,” he said. “When times get tough and no one knows what to do, that’s when they go to the U.N.. How long will it last? I don’t want to speculate. But I am convinced that if the world is going to survive, we need to either strengthen the U.N. or create an organization that does what the U.N. was intended to do with the resources and backing to do the job.”

Lewis says Smylie established a respected reputation of Presbyterian presence at the United Nations, a reputation that stands today.

“I believe his greatest contribution to the Presbyterian Church was through the resolutions and recommendations he drafted annually for the Advisory Committee on Church and Society for presentation to the General Assembly,” said Lewis. “The remarkable legacy built up over the years as Bob addressed one critical issue after another, evidences a depth of strategic insight and ethical clarity that is without equal in American Protestantism.”

A memorial service in Smylie’s honor will be held 11am January 16 at First Presbyterian Church of Englewood, New Jersey, where he worshipped and sang in the church choir.

Smylie was preceded in death by his wife, Yuri Yamamoto, a concert pianist and teacher. He is survived by two sons, Mark and Joseph. In lieu of flowers, contributions may be made to the Memorial Scholarship established by the family of his grandniece Rachel G. Smylie at the charity Geography of Hope.