The missionary and pastor modeled courage, faith as a hostage in Lebanon in the ’80s 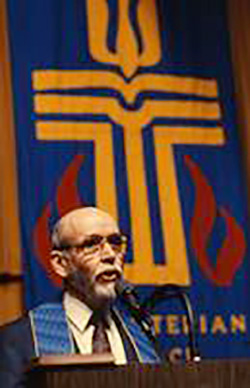 Former Presbyterian Church (U.S.A.) Moderator Benjamin Weir, who survived 16 months in captivity as a hostage in Lebanon in the 1980s and became a voice for peace and reconciliation in the Middle East, passed away Friday morning in Oakland, California. He was 92.

“I knew Ben Weir as a devoted family man with a humble spirit who possessed a courageous love for the gospel,” said PC(USA) Stated Clerk J. Herbert Nelson, II. “He loved the Presbyterian Church (U.S.A.) and served as Moderator of the General Assembly with a deep sense of humility and compassion for people.”

Weir, a teaching elder and member of the Presbytery of San Francisco, was Moderator of 198th General Assembly (1986). His election came on the heels of being freed on September 14, 1985 after being kidnapped on the streets of Beirut, Lebanon by a faction in Lebanon’s civil war. He and his wife, Carol, who passed away in 2010, were mission co-workers in Lebanon from 1953 to 1985.

Weir’s call included serving in a Shiite Muslim community in south Lebanon, with the Near East School of Theology in Beirut, and as support for the National Evangelical Synod of Syria and Lebanon. 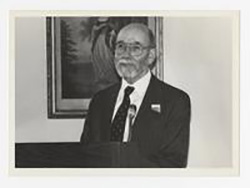 His time as a hostage, 14 months of which were in solitary confinement, is chronicled in the Weirs' book Hostage Bound, Hostage Free. Weir was one of seven Americans kidnapped over an 18-month period in Lebanon.

“He and his late wife Carol were a powerful team that emanated Jesus’ love,” Nelson said. “They are both now with the Lord. Well done.”

“Ben Weir was a true humble hero,” said former PC(USA) Stated Clerk Gradye Parsons. “He is testimony to the dedication our missionaries have to their call. His unselfish faith should be a model for us all.”

Funeral services will be held for Weir at 2 p.m. (Pacific Time) on Saturday, November 19, at First Presbyterian Church of Oakland, California. In lieu of flowers, please make donations to: