‘The Confirmation Project’ to study effectiveness of discipleship programs 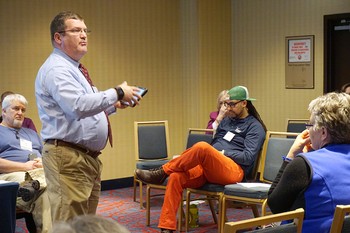 Mark Hinds remembers the effect that confirmation had both on himself and his brothers.

“In our family, it had a 30 percent success rate,” Hinds told a room full of Christian educators at the 2016 Association of Presbyterian Church Educators (APCE) gathering here. “I’m still in the church, my brothers aren’t.”

As heads nodded knowingly in response to Hinds’s admission, the room started humming with many questions about the efficacy and the future direction of the confirmation process in the Presbyterian Church (U.S.A.)

Mikoski began his part of the presentation by introducing workshop participants to the ongoing work of “The Confirmation Project,” which “seeks to learn the extent to which confirmation and equivalent practices in five Protestant denominations are effective for strengthening discipleship in youth.” In addition to the PC(USA), the participating denominations include the African Methodist Episcopal Church, the Episcopal Church, the Evangelical Lutheran Church in America, and the United Methodist Church.

“It’s an open-ended collaborative effort,” said Mikoski, inviting attendees to visit the project’s website and take part in the study. “We want you to help shape the answers and the future direction.”

Mikoski said that the study was undertaken because the “anecdotal evidence is that confirmation is not really working like it used to.”

“People on the ground have the sense that unless they have groundbreaking stuff, the old way isn’t working anymore,” he said. “They’re looking for some sort of ‘magic curriculum,’ but there are much deeper issues that have to be looked at.”

Mikoski said that the denominations are studying confirmation now because so much has changed, especially the way that people communicate and learn. He said in his own teaching, he started sensing a change about five years ago.

In presenting some of the ongoing study’s early research findings, he shared that the PC(USA) is at the bottom of the list of denominations with respect to general requirements for confirmation—length of individual sessions and duration of overall program—with Lutherans at the top.

In studying what type of confirmation curricula denominations currently use—independently published, self-written, non-denominational—Mikoski said that there are “significant implications for rolling out new curriculum.”

“Confirmation arose out of a fracture in baptism in the early church,” he explained. “You’d do the water part, and then later, you got the baby to the bishop to do the confirmatio. Over the years that rift grew and became farther and farther apart.”

Today there is “a great deal of confusion and frustration” about the theology of confirmation and a lot of diversity in its practice.

One of the research’s key findings that Mikoski shared was that in passing religion from generation to generation, the most important factor is the parents, especially the role of the father.

“Parents are, for good or for bad, the most effective religious educators of their children,” he said. “Our task, therefore, is not to come up with a shiny new curriculum but to help instruct parents. There’s a larger ecology; we have to target the parents, to help them to reclaim their primary vocation to be teachers of the faith.”

After Hinds invited participants to break into small discussion groups—and to tweet their comments and questions to #PCUSA_Confirm—Mikoski followed up with an in-depth presentation on the neuroscience of cognition.

As the workshop closed, Hinds and Mikoski laid out the proposed schedule for the publication of a new confirmation curriculum. “The advisory team will begin to develop it in the fall,” said Mikoski. “Fall 2018 is when you can look forward to a new denominational curriculum. So please go to the website and say you want to participate.”