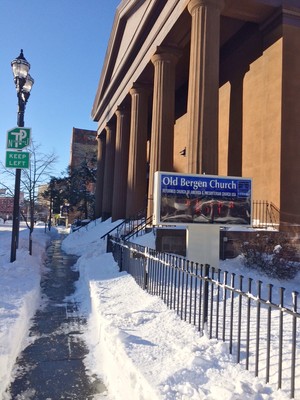 New Jersey’s oldest established congregation has experienced spiritual transformation as it prepares for several thousand new neighbors moving into their neighborhood, only 10 minutes from the World Trade Center in NYC. —Photo provided

To the Rev. Jon Brown the congregation he serves, which is about ten minutes away from the World Trade Center, is like “a treasure hidden in a field.”

He arrived in Jersey City at Old Bergen Church in 2010. Two years into his leadership the state’s oldest religious congregation—Old Bergen, established in 1660—was in transition. Their school, which had been the center of church activity for 15 years, was in the process of closing.

The school’s director, assistant director and administrator, who were also the church’s clerk of session, treasurer and secretary, all decided to retire in 2013.

“It was clear to our then 30 to 40 worshiping members this turnover of leadership would mark a change,” says Brown, “in both the pattern of life together in church and in our communication.”

During the transition time the Presbytery of Palisades was offering its congregations an opportunity to go through New Beginnings, a church transformation process sponsored by the Presbyterian Mission Agency. Using prayer, discernment and assessment tools it helps churches and presbyteries envision a new future for their congregations.

“It helped us clarify what values we wanted as a church moving forward,” says Brown of New Beginnings sessions Old Bergen went through in 2014. “It gave us a context to celebrate and treasure the heritage of our past as we considered what was next for us in our neighborhood.”

The good news for Old Bergen was the church trustees had addressed major maintenance issues for decades. As a result, the church was initially able to focus on some of the smaller physical things they noticed by going through New Beginnings. As they walked around their building with an assessor they realized the church may appear closed to its neighbors. The front door on the huge steps leading up to the church was locked except on Sunday morning. 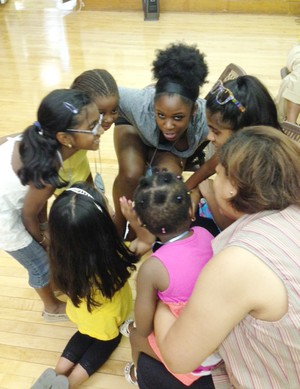 Old Bergen Church plans to open an afterschool program in their neighborhood this fall and hire a youth director. Here kids, teens and adults enjoy a moment of play at Vacation Bible School. —Photo provided

Brown says they also saw the need for signage “to communicate to those around us who we are.” Once they got inside the building they saw with new eyes all the clutter. There were piles in stairwells they hadn’t noticed in years. It was dark on the third floor in the education wing; there were tears and holes in the carpet that had been patched over with duct tape. All making it look like “we were not that excited about be here,” says Brown.

As Old Bergen addressed updates to its physical appearance, attitudes began to shift. The congregation began to address their spiritual and prayer life. They initiated a weekly Bible study and discipleship class, and began to walk through the neighborhood on Saturday mornings asking people they saw, “How can we pray for you, for our neighborhood?”

Located near a major transportation hub to New York City, they received a variety of responses. Thinking they were panhandlers some told the prayer teams they didn’t have any money. Others walked away, or said “thanks, but no.” There was also the “wow, no-one’s every asked me that before,” and the occasional, “please pray for me right now.”

Thanks to the prayer walks, Old Bergen began to imagine new ways of doing mission and ministry in their neighborhood. They plan to open an afterschool program in the fall of 2016 and to hire a youth minister—all changes made as new life emerges in their church. They’ve seen steady and consistent growth, especially in new members age 30-40. Weekly worship attendance is now 100 to 120. Nine new members joined them last year, one by adult baptism.

All of this is helping Old Bergen prepare for a population explosion happening in their neighborhood. Groundbreaking on three high-rise apartment complexes—40, 50 and 75 stories high—near the transportation hub has already occurred. Another three, 20 to 30 stories high, are slated to go up two block south of the church.

“We’re going to have a several thousand new neighbors within blocks of the church in the next five to seven years,” says Brown. “God is doing something new at Old Bergen, which was chartered by the first Dutch immigrants to arrive in the U.S. more than 350 years ago.”

Prior to accepting his call to serve Old Bergen, Brown worked as Director for Mission Interpretation for the Presbyterian Church, (U.S.A.)