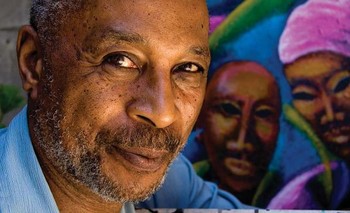 James Noel in front of his painting 'Continuity' in 2009. —Courtesy GTU

A gifted painter, his artwork was on display throughout the SFTS campus and in numerous art galleries in the Bay Area. He said of his paintings: “They contemplate, celebrate, and represent the African Diaspora’s social, religious, and cultural experiences in North America, the Caribbean, and South America… I wanted to capture the beauty and dignity of Black folk as a reality as well as an ideal.”

Possessing a rich bass voice, Noel would often break into song, especially Black spirituals, during a lecture or a sermon. His voice commanded attention and his words spoke to the heart of things. He was a person of sharp intellect, deep feeling, and enormous passion. He could be angry and impatient, but also tender and gracious. Few others equaled his knowledge of the African diaspora, African American history, and the Black Church. The breadth of his network of scholars, activists, and pastors was truly impressive.

James Anthony Noel was born on January 1, 1948, in Queens, N.Y.  He received his B.A. degree from the University of California, Berkeley, in 1969, a Master of Divinity degree from San Francisco Theological Seminary in 1975, and his Ph.D. from the Graduate Theological Union in 1999.

While at St. Andrew’s Presbyterian Church Noel and others formed the Marin City Community Economic Development Corporation to purchase land in the community on which to build affordable housing, provide essential services, and support the local economy. He served as the first chairperson of the Community Development Organization of Marin City, which developed 40 acres of land into a shopping center, condominiums with access to housing for low-income families, and a new building to house the St. Andrew’s congregation.

Noel joined the SFTS faculty in 1988 after serving a year as the seminary’s Director of Continuing Education. He became a member of the Core Doctoral Faculty at the Graduate Theological Union where he was also the convener of the Black Church/Africana Studies Certificate Program. In 2012 his GTU colleagues honored him with the distinguished professor award, given to those “who embody the scholarly standards, teaching excellence, and commitment to ecumenism that define the GTU.”

The Rev. Robina Winbush, PC(USA) director of ecumenical and agency relations, commemorated Noel in a Facebook post, “Our hearts weep for the loss on earth, but rejoice for the freedom that he now enjoys. As we enter the Lenten Season, might we read again his book ‘The Passion of the Lord: African American Reflections’ by James Noel and Matthew V. Johnson and listen anew for the wisdom that he shares with us?”

“Dr. Noel was a well-respected ecumenist,” she added. “He served on the Just and Inclusiveness Communities Programme of the World Council of Churches and was a PC(USA) delegate to the World Communion of Reformed Churches Caribbean and North American Area Council Assembly in 2012 in the Dominican Republic. He attended several ecumenical conferences and presented his academic research. Colleagues in the global ecumenical community have shared expressions of gratitude for his ministry and sorrow for the loss of his insights and wisdom in the ecumenical movement.”

SFTS president Jim McDonald said, “Professor Noel was a larger-than-life presence at SFTS, whether in the classroom, pulpit, faculty meeting, office, or in one-on-one conversations. His achievements, contributions, and accomplishments are manifold. He was a towering figure in many different communities, networks, conversations, always bringing the prophetic word and challenging us to address the basic issues of justice related to race and poverty.”

His daughter Amada said of him: “He had the kind of character that allowed his presence to be known without him speaking a word. He had a character that was complex and intricate, like his mind. He was a man invested into his community and because of this I shared him with his students, colleagues, church folk, friends and witnessed how effortlessly he was able to touch people's lives.”

The Rev. Jerry Van Marter, Alumni Relations Advisor at SFTS, noted: “With the passing of James Noel, all of us associated with SFTS have lost a towering leader, a gifted teacher, a passionate preacher and a tirelessly effective advocate for racial and social justice—God‘s justice. Most of all, we have all lost a true friend.”

As of publication time, details regarding Noel’s memorial service and the family’s wishes were not available.