The church in Cuba and new relations with the US

Ham-Stanard says ‘With God, all things are possible’ 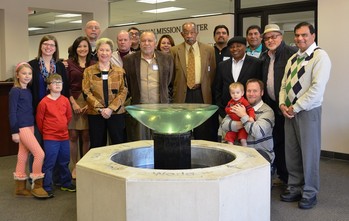 The Rev. Dr. Carlos Emilio Ham-Stanard visited Grace Presbytery in Irving, Texas, in January as part of a whirlwind tour of seven stops in 14 days in the United States. He is the president of Matanzas Evangelical Theological Seminary in Cuba and was making personal visits so he could get to know the seminary’s partners better.

Ham-Stanard spoke to a group at Grace Presbytery about the history of the church in Cuba as it intertwined with his own personal story. He was born in Cuba but spent much of his youth in Virginia with his mother while his father studied theology in Europe. The family moved back to Cuba during the Cuban Missile Crisis in October 1962.

We must stay and help the churches in Cuba

“We returned to Cuba against the traffic because 80 percent of the seminary graduates and 70 percent of the Presbyterian pastors left the country,” Ham-Stanard said. “While my parents had many opportunities to go back to America or go live in Europe, my father said we needed to serve the churches in Cuba.”

He said the church in Cuba today was shaped by the 30 percent of pastors who stayed in Cuba.

“The church today owes a lot to the pastors who stayed during a critical time, living in an atheist regime, and we also owe much to the women of our church who were determined to help keep the church alive.”

Atheist policy was imposed on the people, which created what Ham-Stanard called a “double standard” with people having both a private and a public identity.

“People in Cuba have always been very religious,” he said, “but living under an atheist regime meant practicing their religion in private and then wearing their atheism on the outside, in public, like a jacket.”

Ham-Stanard said they were lucky because the government did not close churches, nor were pastors persecuted for their beliefs. The Cuban people endured what he called a “more subtle type of discrimination.”

“Religious people could not pursue a career that might impact the ideology of the people,” he said. “If you were religious you could not study journalism, psychology, international affairs, and so forth. You could have a technical career, such as medicine and engineering, so as not to changes the minds of the people.”

One question can change a person’s life

Ham-Stanard had just completed service in the army when his local pastor asked him, “What are your going to do with your life now?” He had wanted to study engineering, but the pastor encouraged him to think about a religious life. He spoke to his father, who gave him his blessing to pursue his call to serve God.

“This shows how one question can change a person’s life,” Ham-Stanard said. “The Gospels are full of examples in which Jesus raised questions that change the lives of the people, and one question changed my life.”

He Dr. Ham-Stanard said the outlook for religious people became more positive following several events in the 1980s and 1990s. The first was a 1984 visit to Cuba by then presidential candidate Jesse Jackson, who invited Fidel Castro to attend a service at a Methodist church. They two attended together and their visit was broadcast on national television.

The second event was when Castro published a book, “Fidel & Religion: Conversations with Frei Betto on Marxism & Liberation Theology,” which was the result of Castro spending 23 hours with a Dominican priest from Brazil.

The third event was at 1989 meeting of Cuban religious leaders with Castro. “This is when we told him that atheism was becoming so dogmatic it was becoming a form of religion,” Ham-Stanard said. That meeting led to a public referendum where the people voted to amend the constitution in a way that gave people a choice to be atheist or not.

“After that, we started to experience a tremendous opening in our religious lives and churches started carrying out their mission outside the sanctuary walls,” Ham-Stanard said.

The 1998 visit of Pope John Paul II led to the establishment of Protestant rallies held at stadiums and broadcast on television. Today, Ham-Stanard said pastors are now elected to Parliament.

With God, all things are possible

Fast forward to 2014 and Ham-Stanard said everyone in Cuba was caught off guard by the announcement a chance for normalization of relations between the United States and Cuba.

“We were surprised to see the pictures of President Obama with Raul Castro,” Ham-Stanard said. “We never thought we would see this in our lifetime, and we still have a long way to go. Every Sunday for decades, we prayed for the normalization of relations between our two countries. With God, all things are possible.”

He said today there are 14 seminaries in Cuba. He was named president of Matanzas Evangelical Theological Seminary in 2015, and this year is the seminary’s 70th anniversary.

“God is in control, and that is why we are the church in Cuba that we are today,” he said.

Ham-Stanard encouraged Presbyterians to visit Cuba. “We are a witness for the church and you will see your own faith from a different perspective if you visit us.”