Coordinator for Presbyterian Committee on the Self-Development of People retires

Cynthia White reflects on 37 years of ministry around the world 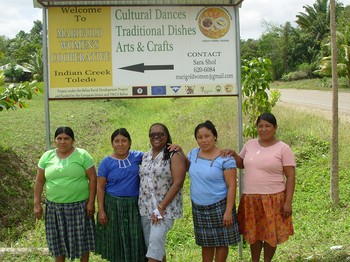 Cynthia White, (center) visits with the Marigold Women’s Project in the Toledo District of Belize, one of the SDOP funded projects in the region. —Photo provided

For most of its nearly 46 years of ministry, the Presbyterian Committee on the Self-Development of People (SDOP) has had one familiar face on the front lines of its work, Cynthia White. The SDOP coordinator is stepping down this month after 37 years of work with the program, having joined the staff while its offices were in New York.

“I started working with SDOP on January 4, 1979. The offices were still in the building lovingly referred to as ‘Heaven on the Hudson’,” she said. “I had been working freelance in the film/video industry helping people of color secure positions behind the camera. My husband and I decided that somebody had to get a real job and fortunately I came upon SDOP.”

At the time of her arrival, SDOP had two staff members, Christina Bellamy and the Rev. Dr. St. Paul Epps, the ministry’s first director.

“Dr. Epps was a mentor, friend, father figure and a wonderful teacher. For my beginnings, I give thanks to him,” White said. “There are other colleagues I look to as mentors and sources of inspiration, including Curtis Kearns, Jr. who served as chair of SDOP for several years. He was very instrumental in my growth in this position and my appreciation for the church.”

Through the years, White says SDOP has remained true to its ministry, engaging in partnerships with economically poor, oppressed and disadvantaged people.

Since its inception in 1970, SDOP has supported more than 5,600 projects in 67 countries, awarding more than $100 million in grant funding. The ministry has taken the approach of allowing the community to best determine how grants should be used.

White says she’s grateful to have had the opportunity to see those dollars in action over the years. She particularly remembers an Alaska project, the Arctic Slope Native Association in Barrow, a land rights project that was awarded $85,000 in 1972. Once they won their case, they returned the money to SDOP.

“I had the pleasure of visiting with them two years ago and met the adult children of those who received the initial funding,” White said. “The mayor of Barrow is the daughter of one of the association’s founding members. To go back and see how that land rights case impacted Barrow was a very powerful moment for me.”

Another funded project White is proud of is a grant provided to the Coalition of Immokalee Workers (CIW). “We watched CIW grow into the organization that it is today, so I’ve been very proud of that.”

“The view from my window in New York was Riverside Church with the Hudson River as a backdrop. It was absolutely gorgeous. Then we walked into this building in Louisville and many of us cried because we couldn’t believe we were moving here. But the city did a wonderful job in the renovation,” she said. “At that time, my husband and I felt that the job and ministry were important enough that we could take a chance and make the move and Louisville has been very good to us over the years.”

Joseph Johnson, who serves on the SDOP committee, offers high praise for White and her work over the years.

“I’ve known Cynthia since I began serving on the committee in 2002 as she was just assuming the role of coordinator,” he said. “Cynthia has been the spirit of SDOP for my entire tenure on the committee and has become not only a great leader but also a dear friend.”

White and her husband DeeHoward plan to relocate to the Caribbean in the next two years, however she says her heart remains with SDOP and its future.

Sara Lisherness, director of Compassion, Peace and Justice Ministry within the Presbyterian Mission Agency, said White and three other retiring SDOP colleagues “have given their hearts and souls to this ministry, providing opportunities for communities to make positive change.”

“We have truly been blessed by their dedication, commitment and passion for ministry in a hurting world,” she said. “We shall miss them dearly but pray God’s blessing on each of them in the days and years ahead.”

For more information about the Presbyterian Committee on the Self-Development of People, click here.