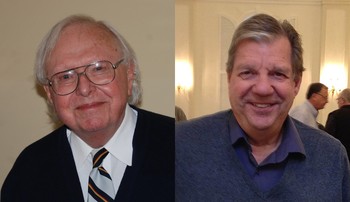 Two veteran church communicators have been named recipients of the Lifetime Achievement Award by the Presbyterian Writers Guild (PWG). The Rev. Houston Hodges and the Rev. Jerry Van Marter will be recognized for “distinguished service to the church through writing/communication” at the Guild’s General Assembly luncheon June 23 in Portland, Oregon.

Van Marter, who currently serves as stated clerk of Mid-Kentucky Presbytery and alumni relations advisor for San Francisco Theological Seminary, retired in 2014 from the Presbyterian News Service (PNS) after more than 26 years of reporting and editing. His byline has appeared on stories covering the work of the various councils, committees, and task forces of the church and its ecumenical partners, including 39 General Assemblies. During his career, he traveled to almost every state and all over the world to “see first-hand the life-changing mission and ministry being done in the name of our beloved denomination.” Ordained by Olympia Presbytery in 1971, Van Marter has served as pastor of congregations in Richmond, Oakland, and San Francisco, California, prior to his ministry with PNS.

Van Marter credits Hodges with giving him his start as a church journalist in San Francisco Presbytery. “I'm deeply honored by the Life Achievement Award,” said Van Marter, “and I am especially tickled to be honored with my dear friend Houston Hodges. Without his encouragement I never would have even considered a career in church journalism.”

Hodges also cited his friendship with Van Marter in his response to news of the award, “The communicator is short on words,” said Hodges. “Oh, my. The thing that just keeps flooding over me is that I get to share it with Van Marter, and we’ve done so much of it together.”

Self-described as now “mostly retired” and a “ham,” Hodges’s first experience in journalism was helping his parents put out their West Texas semi-weekly newspaper. Ordained in 1954, his ministry has included campus ministry, pastoral leadership in Texas and California, as well as in Winnipeg with the United Church of Canada. Prior to retirement in 1995, he served as executive presbyter of North Alabama Presbytery. In addition to the General Assembly newsroom, his writing career has included serving as editor of Monday Morning magazine and as author of Circle of Years: a Caretaker's Journal, the story of his mother's battle against dementia. With Matt Cooney, he co-authored Faith Alive, describing the development of a congregation’s interactive and intergenerational worship.

Hodges was a pioneer in the use of computers and the internet for church communications, recognizing early the potential to “be in touch anytime, anywhere.” For the last decade, he has been heard on WLRH Hunstville Public Radio as a contributor to The Sundial Writers’ Corner. These broadcasts are being archived on a website curated by his family.

Previous Lifetime Achievement Award winners include the Rev. J. Barrie Shepherd, a renowned Presbyterian poet and pastor, and the “Presbyterian poet laureate” Ann Weems, who died on March 17 at the age of 81.