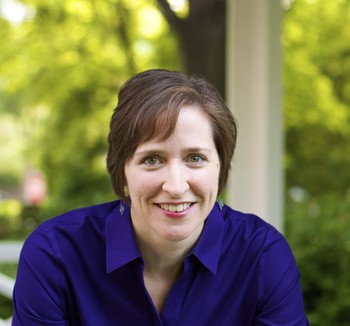 The Rev. MaryAnn McKibben Dana, a writer, pastor, conference leader, and highly sought-after speaker, has been named the recipient of the 2016 David Steele Distinguished Writer Award by the Presbyterian Writers Guild.

Dana—author of Sabbath in the Suburbs, a Chalice Press bestseller for two years running—has a robust presence on social media, and has been commenting on life, ministry, theology and culture on her blog, The Blue Room, for more than twelve years. She will receive the prestigious award at the Presbyterian Writers Guild’s General Assembly luncheon June 23 in Portland, Oregon.

Named for the late David Steele—Presbyterian poet and essayist best known for his “Tuesday Morning” column in The Presbyterian Outlook—the distinguished writer award is given biennially to a Presbyterian writer who blessed the church with his or her writing over the course of a career.

“[MaryAnn] is a voice that speaks to our modern situation and does so with grace and dignity, a love for the church and its people, and a prophetic word for those with ears to hear,” wrote the Rev. Rebecca Page Lesley, pastor of Green Acres Presbyterian Church in Portsmouth, Virginia, in nominating her for the honor.

Dana, who most recently served as pastor of Idylwood Presbyterian Church in Falls Church, Virginia, was featured on PBS’s Religion and Ethics Newsweekly for her work on Sabbath. Her writing has appeared in TIME.com, The Washington Post, Religion Dispatches, Journal for Preachers, and The Christian Century, and for three years in a monthly column for Presbyterians Today. Her next book, tentatively titled Improvising with God, is under contract with Eerdmans and will be published in 2017.

“We are especially thrilled to honor MaryAnn with this award named for the late David Steele, who also delighted in experimenting with new forms of writing and modes of communication,” said the Rev. William Lancaster, who, with the Rev. Emily Enders Odom, co-chaired the selection committee.

Dana, who lives with her family in Reston, Virginia, also served as co-chair of NEXT Church for two years, a movement within the Presbyterian Church (U.S.A.) that “seeks to call forth vital ministry for our changing cultural context.” She is a mother of three, a “haphazard knitter,” and an occasional marathoner.

“For once, the writer is at a loss for words,” said Dana upon being informed of the honor. “I couldn’t be more honored and humbled to be in the company of other Distinguished Writer Award recipients—people whose work I’ve read and admired for much of my adult life. I am especially touched that my colleague and fellow Columbia Seminary alum, Becca Page Lesley, took time out of her busy life and ministry to nominate me for this honor. I’m surprised, touched and grateful.”