‘I left this earth in Alleluias,’ Weems wrote in unpublished poem 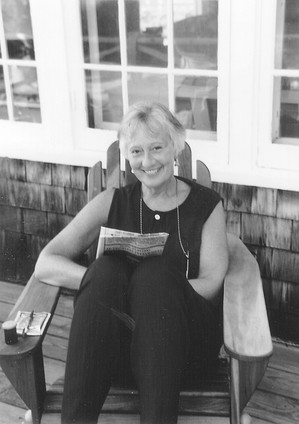 In life, Ann Barr Weems was always reaching for rainbows.

And—through the multihued palette of her prodigious poetry—Weems gave the world an extraordinary vision of God’s and the rainbow’s promise.

On March 17, the gifted and prolific “Presbyterian poet laureate” reached her own rainbow, dying to eternal life at the age of 81 due to complications from a brain tumor.

In an obituary published on March 20 in the St. Louis Post-Dispatch, her family described Weems as “a noted writer, speaker, liturgist and worship leader. Among her seven published books or collections of poems, meant to be used in worship, in personal devotions, and in discussions, are Kneeling in Jerusalem, Kneeling in Bethlehem and the best-selling Psalms of Lament. She is also the author of the critically-acclaimed poem, Balloons Belong in Church, about her then four-year old son, Todd, who brought an orange balloon with pink stripes to church school one Sunday morning.

In the meditation delivered at Weems’s funeral service on Monday, March 21, at Trinity Presbyterian Church in St. Louis, the Rev. John S. Carothers, an honorably retired member of Giddings-Lovejoy Presbytery, remembered Todd as he declared that “the faith that Ann proclaimed was the faith she lived.”

“As most people know, [Ann’s] son Todd was murdered on the night of his 21st birthday,” Carothers said. “Her grief and bewilderment were profound. Her friend and colleague, Walt Brueggemann, once ventured a question to her which he said she did not need to answer if she did not want to. The question was one from the Psalms. ‘Will Rachel finally be comforted?’ Ann thought and finally responded, “No.” Not until God wipes away every tear from our eyes (recounted in the introduction to Psalms of Lament), referring to the promise at the end of scripture.

Weems was born July 9, 1934 in Nashville, Tennessee. Her father was Thomas Calhoun Barr, also of Nashville, a Presbyterian minister. Her mother, Gladys Hutchison Barr, of Albany, New York, was a lawyer and an author of seven historical novels and children’s books, including The Bell Witch at Adams. Weems was honored with both the Lifetime Achievement Award and the David Steele Distinguished Writer Award by the Presbyterian Writers Guild.

She is survived by her husband, the Rev. Dr. Donald A. Weems; her children, Stuart and David Weems and Heather Weems-Elliott; daughter-in-law Catherine Weems and son-in-law Marcus Elliott; her grandchildren, Barrett Weems, Christopher Simmons, Douglas Weems, Alexandria and Sofia Elliott, and Millie Phillips; and four great-grandchildren. She is also survived by her sister and nephew, Jane Barr Stump and Bob Stump; sisters-in-law Wanda and Judy Barr; cousins Arthur Stuff and Dale Morgan; and many nephews and nieces.

"Ann and I always went to the free photo booth at General Assembly and had a picture taken together," recalled the Rev. Dale Lindsay Morgan, Weems's cousin. "At the 202nd General Assembly (1990) in Salt Lake City, we got Jane Dempsey Douglass to pose with us and we called it, 'The Professor, the Preacher, and the Poet.'"

Upon learning of Weems’s death, renowned Presbyterian poet and pastor, the Rev. Dr. J. Barrie Shepherd, recalled both her legacy and the enduring friendship they shared.

“Ann Weems was an inspired poet, and a true friend,” Shepherd wrote in an email. “Her gracious ways with words endowed her with that rare and magical ability to speak directly and movingly to the average Presbyterian in the pew and at the same time to reach toward the transcendent and the sublime. Her several books of poetry and meditations have touched and illuminated countless lives; enriching the daily round of the faithful believer, as well as bringing rich new insights to the traditional seasons and festivals of Advent/Christmas and Lent/Easter . Ann’s writing was deeply rooted in the scriptures, and in the daily lives, both joys and sorrows, of the people of God.”

The Rev. Dr. John M. Buchanan, moderator of the 208th General Assembly (1996) of the PC(USA) and former editor/publisher of the progressive ecumenical journal, The Christian Century, also remembered Weems as “a dear friend.”

“She and her husband were at Ghost Ranch during the Albuquerque General Assembly in 1996,” wrote Buchanan in an email. “I asked her and Barrie [Shepherd] to be ‘Poets Laureate’ for the Assembly and they both graciously agreed and wrote and read a poem each day. It was wonderful. Ann is a Presbyterian saint.”

Carothers opened his meditation by sharing with the congregation that Weems, not surprisingly, did not want a eulogy at her funeral. “She said, and I am quoting, ‘I am adamant about this,’” said Carothers. “And as we hear these words, we can almost see her and certainly believe she meant it. She did say that she wanted friends, colleagues and clergy in a processional, a jazz band, music, bagpipes; prayers, scripture, thanksgiving and praise given to God for life, for this life for all of it.

For Carothers, a very moving moment during Weems's funeral service came from Belden Lane. “He remembered that he and Ann often had conversations about writing and that she once said that writing was, for her, a spiritual exercise, a form of prayer in which one can imagine what might be and in the writing help it become true,” Carothers recalled. “Belden then read Ann's poem ‘One More Wall, One More Olive Tree’ from From Advent's Alleluia to Easter's Morning Light.”

In Reaching for Rainbows, Weems memorably wrote, “I know the promise of the rainbow. I keep thinking I’ll turn a corner one day and find a litany of rainbows flung across the sky. Hosannaing back and forth through all the ages and out into eternity forever amen!”

And now she has turned that corner.

Carothers closed his meditation with the unpublished poem ‘When You Hear of My Demise,’ written by Weems in 2010.

When you hear of my demise
Don’t believe a word of it!
Our God is the God of the living
And I am living still!
If it were not so
He would have told us!

Don’t believe a word of it!
And whatever you do
Please please please
Don’t eulogize me!

Gather instead for worship!
To celebrate God
Who gives each of us Life Abundant!

Remembering that Jesus is
The way, the truth, the life.
Gather to celebrate life with scripture and prayer
With jazz band with choirs, with pipers with dancing

Follow with faithfulness the life you have been given!

I left this earth in Alleluias
Dancing with the angels of life
Among the stars of God.