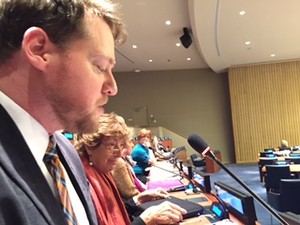 Ryan Smith (far left) from the Presbyterian Ministry at the United Nations addresses the 60th (2016) UN Commission on the Status of Women. —Photo provided

“For 177 years, the Presbyterian Church has served as one of the greatest forces for education in the world, helping hundreds of thousands of children learn to read and write as well as think critically,” he said. “Our church’s core belief is that every child is created in the image of God, motivating our early mission workers to reach out to new communities with the offer of a quality education.

Smith told the commission during his March 18 address that Presbyterians were often the first to provide opportunities for girls to receive a formal education.

“Our church is a church of educators, school administrators, PTA members, school board members and school volunteers,” Smith said. “We believe God calls our church to impact the quality of education for children in the United States and around the world.”

Smith briefly described the church’s “Educate a Child, Transform the World” initiative. The Presbyterian Mission Agency, along with global partners and education leaders launched the effort in 2014 to address persistent poverty and the importance providing quality education to young children. Its goal is to reach one million children in four years, connecting Presbyterians with efforts to reach that goal.

“We remind the Commission on the important role that faith-based organizations play in work towards a just and sustainable future for all, including the empowerment of women,” said Smith. “Our focus on education provides only one example of the many ways the faith community strengthens communities and empowers women and girls.”

Thirty-three Presbyterian women, including 14 young adults, attended this year’s 60th session of the United Nations Commission on the Status of Women. The delegation was organized through a partnership between the Presbyterian Ministry at the U.N. as well as Racial Ethnic & Women’s Ministries and Presbyterian Women in the Presbyterian Church (U.S.A.) The Commission devoted a session to women’s empowerment in sustainable development and reviewed the outcome of the 57th Commission (2013) on the elimination and prevention of all forms of violence against women and girls.

The PC(USA) hosted a parallel event during the NGO Committee on the Status of Women’s Forum focusing on education as a way to break cycles of poverty for women and girls. The group heard from a number of Presbyterian leaders including Frank Dimmock, Presbyterian Mission Agency; Wanda Beauman, Presbyterian Women in the PC(USA); Veronica Muchiri, Presbyterian Church of East Africa; and Carol Grant, Presbyterian Women, Aotearoa, New Zealand.

The commission is a functional commission of the Economic and Social Council of the U.N., one of the oldest, consisting of 45 members. NGOs with accreditation are able to send participants to the commission. The PC(USA) applied for and received accreditation in 1998.

Tags: commission on the status of women, compassion peace and justice, csw, presbyterian ministry at the united nations, united nations