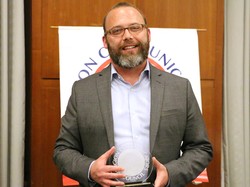 David Barnhart receives the DeRose-Hinkhouse Best in Class “Audio & Video, Broadcast, Non-Broadcast, and Cable” Award the Presbyterian Disaster Assistance documentary, 'Locked in a Box: Immigration Detention.' —George Conklin
The Religion Communicators Council (RCC) has recognized the communications ministry at the Presbyterian Mission Agency of the Presbyterian Church (U.S.A.) for its excellence in several categories. The DeRose-Hinkhouse Award reception was held in New York City on March 31, 2016, in conjunction with RCC’s annual national convention.
The awards recognize the achievements of RCC members who demonstrate excellence as religion communicators. Aimee Thunberg from Auburn Seminary and Tracey Del Duca of the Ruth Stafford Peale Library in the Interchurch Center helped coordinate judging of the awards. The awards honor the late Victor DeRose and Paul M. Hinkhouse, who were leading lithographers in New York City.
Top honors were awarded to David Barnhart, who received the Best in Class prize in the “Audio & Video, Broadcast, Non-Broadcast, and Cable” division for the Presbyterian Disaster Assistance documentary, Locked in a Box: Immigration Detention. The documentary won the Morris Film Award for documentaries at the 2015 Tryon International Film Festival in North Carolina and was viewed at the Beaufort International Film Festival.
PC(USA) communicators received additional honors for the following works:
The RCC is an interfaith association of religion communicators at work in print and electronic communication, marketing, and public relations. Established in 1929, it is the oldest association of religion communicators in America. There are six local chapters around the country as well as members-at-large in cities where a chapter does not exist. The chapters meet monthly, providing an outlet for education and networking for the members. The chapters also serve to promote excellence in the communication of religious faith and values as well as understanding among diverse faith groups.
-----
A complete list of the 2016 DeRose-Hinkhouse award winners can be found at http://www.religioncommunicators.org/derose-hinkhouse-awards
The 2017 RCC National Convention will gather March 29-April 1 in Chicago, Illinois.