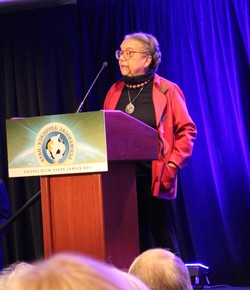 The best way to disrupt the cradle to prison pipeline is to be an advocate for children in need. That was the message from Marian Wright Edelman to attendees at last weekend’s Ecumenical Advocacy Days gathering in Washington, D.C.  The founder and president of the Children’s Defense Fund says this country’s priorities about wealth and where those dollars should go are not in line with helping those living in poverty.

“There are 15 million children living in poverty with seven million in extreme poverty. We need to get our priorities straight,” Edelman said. “Something is wrong when a CEO can take home more than $156 million. That’s more than the combined annual salaries of 7,910 child care workers.”

Edelman shared statistics showing a tremendous gap between the rich and poor saying the five wealthiest Americans together control more wealth than the combined gross domestic product of five states. She added that the gap between rich and poor has reached historic heights.

“We have a real spiritual crisis and the church needs to speak up and change these priorities. Most of our church doors are closed too many hours of the day,” she said. “The churches need to be open and become a place of safety and engagement for young people regardless of whether they belong to the church or not.”

Edelman believes churches should take a stronger lead in the development and growth of freedom schools across the country saying children should be thinking about college not prison.

“America’s poor children didn’t ask to be born, or select their parents, race or faith,” she said. “We have to become better pests for justice and God’s work. Don’t worry about being polite, this is about children’s health, hunger, education and well-being.”

Edelman adds that while most children look forward to summer vacation, those living in poverty dread it because they may go for long periods of time without adequate food.

She also believes educational opportunities would help break up the cradle to prison pipeline adding that the average literacy rate in some state prisons is fifth grade level.

“The mass incarceration system is a massive blight on our nation and we’ve got to break it up,” she said. “I’m glad to see it become a major public issue. I think it’s morally obscene to send young people away from the future they deserve.”

Edelman envisions a future where children can go to school and discover that the only person of color is not the janitor. She adds that the U.S. will “miss the boat to the future” if investment in children isn’t made now.

“I have been blessed to follow her work for over 30 years and while the topics have changed, her story is the same, this country needs to care for its children and we are falling short of that goal,” she said. “We move one step forward and then take two steps back when it comes to children. Fundamentally, children have become second class citizens.”

Lisherness says her dream is for the Presbyterian Church (U.S.A.) to become a leader in the freedom school movement and for every Presbyterian church to make the well-being of children a priority.

“I don’t care if it happens in or outside of the church, we need to be sensitive to how vulnerable children are and create space for them to live up to their fullest potential and be what God created them to be,” she said.

The Rev. Alonzo Johnson, with the Presbyterian Peacemaking Program and convener for the church’s national initiative for Educate a Child, agrees that children need to be a priority.

“It’s so important that churches address the issues connected to education and disrupt the cradle to prison pipeline,” he said. “Advocacy for children is vital and churches have the resources to make it happen.”

Johnson adds that in order to help children succeed, we have to change the way we look at families in need.

“When we see poor children, we stigmatize them and they become a product of their parents,” he said. “We forget that young people are still young. They don’t ask to be where they are in life. Education is so important and it was great to see Mrs. Edelman reinforce how important it is.”

For more information on how to get involved in the work supported by Compassion, Peace and Justice, visit pcusa.org/child.