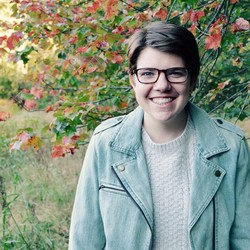 Meredith Cox was sitting in a classroom at Princeton Theological Seminary when the Rev. Dr. Jason Brian Santos walked in and changed her life.

Or at least her summer plans.

“Jason came to talk to our ‘Models of Young Adult and Campus Ministries’ class in March about big scale campus ministry and what it’s like nationally,” said Cox, who is completing her second year of a four-year dual M.Div./M.A. degree in youth and young adult ministries. “At the end of the class, he said, ‘If anyone wants to talk with me further about campus ministry, come see me tomorrow; I’ll be in the café getting coffee.’”

Knowing that her vocational interests closely align with what Santos does in his role as coordinator for Youth, Collegiate, and Young Adult Ministries and national director of UKirk for the Presbyterian Mission Agency, Cox made sure to take him up on his invitation.

“I just went to talk with him about campus ministry, but when I sat down, he said, ‘Hey, do you want to go to Taizé,’” Cox recalled. “He said he just had a spot open up and he thought that I should go. So I said of course I want to go, and I just dropped all my other plans.”

Cox will be joining Santos from May 15-23 as he leads a group of 16 collegiate ministry professionals—including 5 camp and conference center personnel, who are focusing new initiatives on collegiate and young adult ministries—to the Taizé Community in France. The world-renowned community, which is monastic, ecumenical, and committed to simplicity, is made up of over a hundred brothers, Catholics and others from various Protestant backgrounds, from around thirty nations.

“My hopes for this trip are two-fold,” said Santos. “First, I’d like to see the participants experience it as a pilgrimage—as a means of support for their individual spiritual journeys. I like to think of Taizé as a Sabbath community that has the potential to transform how pilgrims see God’s Kingdom and imagine their role in it. Second, I hope that the conversations and reflections about Taizé are generative for the actual contexts in which each participant ministers.”

Brian Frick, associate for Camp and Conference Ministries for the Presbyterian Mission Agency, said that it’s critical that camping ministries at PC(USA)-affiliated centers—which serve 15,000 young adults annually—also take part in and learn from the pilgrimage.

“In 2016 and 2017 we are launching several intentional spirituality-based communities for young adults at our centers that will focus on discipleship and discernment,” Frick said. “By participating in the practices at Taizé, we will launch these new initiatives in a stronger and richer way.”

The upcoming trip will be the second offering in the UKirk Pilgrimage initiative, a denominational effort to expose collegiate ministers to a broad range of spiritual practices, in this case the monastic spirituality embedded in this unique intentional Christian community.

Of course with Cox, Santos is preaching to the proverbial choir. She has already been exposed to the music, message, and mission of the Taizé Community. 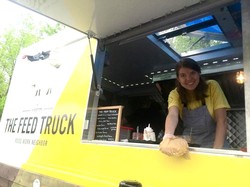 First introduced to Taizé music while serving as a Young Adult Volunteer from 2013-2014 at the PC(USA)’s national service site in San Antonio, Texas, Cox said that she has wanted to go to Taizé for a while.

“I’ve been doing worship leading since I was in ninth grade,” said Cox, a native of Atlanta and a member of Roswell Presbyterian Church, who plays guitar and percussion, and did a lot of contemporary Christian music in her youth, “but I found myself wanting more than that theologically. When I experienced Taizé music for the first time at Divine Redeemer Presbyterian Church, there was just something redeeming about it. As a musician, I found it to be intricate, but also beautiful and simple. I just fell in love with it.”

Cox said that she is grateful to have the opportunity to talk with campus ministers who are doing the work that she hopes to see herself doing one day. As she has read more about the nature of the community, she is also impressed with how the brothers ask the young adults “to really take on responsibility and work.”

“Hard work is tiring and it’s exhausting, but through that mutual experience of working, there are relationships that are created,” said Cox.

As a student at Princeton Seminary, Cox has also been successful in forging meaningful relationships through her own hard work—academically as well as serving as a food truck chaplain with Feed Truck Ministries Inc., which connects college students from Princeton University to the congregation of Kingston United Methodist Church through volunteer service opportunities. She also participates in the chapel choir, which offers a distinct community aspect.

“In Meredith’s story we see the beautiful, intricate web of formative theological education,” said the Rev. Dr. Michelle J. Bartel, coordinator of Theological Education and Seminary Relations for the Presbyterian Mission Agency. “Participation in worship, familiar and new communities, stepping forward as disciples of Christ into new experiences, and deliberate theological reflection are all embedded in and extend beyond a seminary community. Spiritual pilgrimages, such as the one that Meredith and the group are about to undertake, have an organic relationship to theological education, one of mutual formation.”