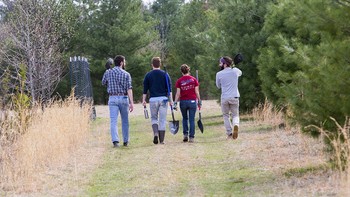 The following article was originally printed in the May/June 2016 issue, "Greening our cities," of Presbyterians Today.

The way Nathan Stucky sees it, our journey to God begins and ends with the dirt under our feet. Stucky, a former farmer from Kansas, is director of Princeton Theological Seminary’s 21-acre Farminary Project in Princeton, New Jersey, a place where seminarians dig deep to cultivate lessons of faith.

“We wanted to see how the idea of God creating humans from the soil would take on new meaning in the garden,” Stucky says. “We’ve discovered that Scripture definitely comes to life when our hands are in the soil.”

“I think there are certain lessons that agriculture teaches,” says Jessica Riegel, a Master of Divinity student. She compares the lessons learned to the difference between writing a paper and growing a radish. “A paper is great when you’ve typed for hours and you can hold this thing up that you’ve done,” she says. “A radish is better because not only have you put all the work into it, but then it comes back and becomes part of you through ingestion and literally gives you the nutrients to function.” 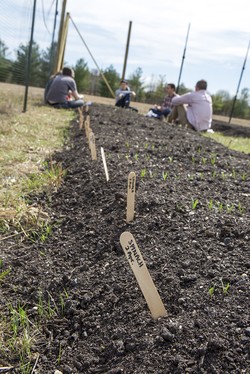 The seed of the idea to combine theological education and farming was planted during a conversation between two Princeton Seminary students in 2008: Stucky, a second-year master’s program student, and doctoral student Jason Brian Santos, who is now national director of UKirk and coordinator for youth, collegiate, and young adult ministries with the Presbyterian Mission Agency.

“Jason pulled me aside and said, ‘Nate, I have this crazy idea. I think we should somehow integrate fully accredited theological education and a small farm.’ ”

Then in 2014, six years after he and Santos discussed a seminary farm, Stucky learned the seminary already owned a farm. “All the pieces came together in an extraordinary way,” he says.

“The church has always concerned itself with the essential matters of life, death, healing—and food,” Stucky says. “From the feeding of the five thousand to the Last Supper to Paul’s instructions on the just distribution of food in Corinth, questions about food have been central to the Christian life.”

Last year Stucky taught a pilot course at the farm to explore how agrarian thought and practice might influence the teaching of Scripture in congregations. Students met in six-hour blocks of time, with four hours of traditional classroom learning—in a barn—and two hours of garden time.

“I hope the Farminary becomes a place, ultimately, where love of God and God’s creation grows.”