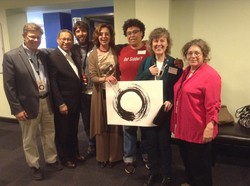 In a twist of fate that actually began in an Iraqi refugee camp several years ago, five peace and justice proponents from the Community of Living Traditions at Stony Point Center drove 800 miles to hear and bear witness to a strong lineup of speakers, activists, and theologians focused on nurturing paths to nonviolence.  The annual Festival of Faiths conference, a five-day celebration of music, poetry, film, theatre and dialogue, featured spiritual luminaries such as Catholic Archbishop Joseph Kurtz, Arun Gandhi, grandson of Mahatma Gandhi, and Rev. Allan Boesak, a leading South African anti-apartheid advocate who worked with Desmond Tutu and Nelson Mandela among its presenters.

Ruling Elder Rick Ufford-Chase and his wife Kitty, co-directors of Stony Point Retreat and Conference Center and the Community of Living Traditions (CLT) traveled with three Jewish members of the CLT to witness and volunteer for the unique, multi-cultural event held annually in Louisville, KY. It was the first-ever visit to the conference for the Ufford-Chases. Zainab Wassef, an Iraqi refugee who attended a Louisville-area college through the Iraqi Student Project and is a former Festival of Faiths volunteer who spent half a year at Stony Point, insisted to the Ufford-Chases that this was a gathering not to be missed. 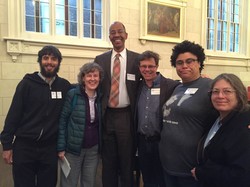 Community of Living Traditions with Musician Harry Pickens at the opening worship for the Festival of Faiths in Louisville. —Rick Ufford-Chase

“A young Muslim woman from Iraq is basically responsible for getting a Presbyterian, a Quaker, and three Jewish colleagues into a vehicle to drive from New York to Kentucky,” offered Rick Ufford-Chase. Even though the Ufford-Chases’ had previously met conference organizers from the Center for Interfaith Relations, this was their first time attending – and volunteering - at the conference. “It’s been great, we have a fabulous relationship with the organizers, and I hope they feel likewise. We’re having a great time and the content has been amazing.”

At Wednesday’s session Archbishop Kurtz told stories about Pope Francis and his commitment to peacemaking. Kurtz is president of the United States Conference of Catholic Bishops, but also served as the Pope’s official host when the pontiff visited the United States in 2015. Arun Gandhi, a peace and environmental activist and the fifth grandson of Mahatma Gandhi, told conversational stories of what it was like growing up with Gandhi as grandfather. Allen Boesak, a long-time church leader and theologian gave a powerful speech on the difference between “forgiveness” and “forgetting” and the importance of reconciliation work.

“My experience with interfaith work is that we often say things in a multi-religious context that are easy for one another to hear because we’re careful not to offend one another,” says Rick. “That’s not been my experience at Festival of Faiths. It’s been hard hitting.” 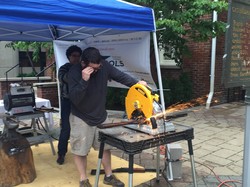 Mike Martin of RAWtools cuts the stock off a donated rifle, preparing to reforge the barrel as a garden tool at a demonstration for the Festival of Faiths. —Rick Ufford-Chase

Ufford-Chase, co-founder of the multi-faith Community of Living Traditions, an intentional residential community at Stony Point dedicated to offering hospitality and building witness for peace and justice, was recently appointed associate for Interfaith Formation for the Presbyterian Mission Agency. He helped start the Community of Living Traditions before PC(USA) developed its now deeply embedded interreligious stance.

“The reason we thought it was worthwhile for five of us to make this trip and devote a full week of our time is because this is the whole purpose of our multi-faith community. The Center for Interfaith Relations brought together amazing speakers from around the world who have done the critical thinking that we all turn to in our community to push us to think critically about peace, justice and non-violence issues,” says Rick. “What we heard was well-respected, thoughtful people saying we need to take a much closer look at non-violence principles, because responding to violence with violence is not solving our problems. They’re asking us to take a thoughtful look at bringing a morally authoritative, multi-religious voice to the question of how to respond to violence in the world using non-violence as a primary strategy.”