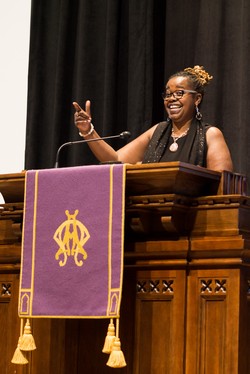 The Rev. Aisha Brooks-Lytle from Wayne (Pennsylvania) Presbyterian Church preaches at the 2016 Next Church gathering in Atlanta. —Gregg Brekke

For some, there has never been a time where there were not women ministers. But others remember when there were no women preachers, no women role models in seminaries and divinity schools, and no women engaged in pastoral care, at least not professionally.

A few years ago, the Rev. Cynthia Campbell, pastor of Highland Presbyterian Church in Louisville and former president of McCormick Theological Seminary, was keynote speaker at the Clergywomen’s Leadership Institute held at Big Tent. Campbell remembered the day she was ordained in the Presbyterian Church (U.S.A.), June 30, 1974. “One thing that stuck in my memory was the ordination certificate,” she remembered. “San Gabriel Presbytery’s stated clerk had to add an ‘S’ to the printed ‘He’ on the certificate. Likewise, ‘his’ was typed over on an IBM Selectric typewriter with ‘her.’”

This year marks the 60th anniversary of women teaching elders in the PC(USA). On October 24, 1956, the Rev. Margaret Towner was ordained as the first woman minister in the Presbyterian Church. Despite the attention and recognition she received—her photo was featured in Life magazine and other publications—Towner said she "chose to avoid the limelight and continue my work in the local congregation."

Towner recently celebrated her 91st birthday, and though honorably retired, she is still an active member of her presbytery.

The Rev. Rachel Henderlite was the first woman ordained as a teaching elder in the Presbyterian Church in the U.S. (or the Southern Church) in 1965. Last year commemorated the 50th anniversary of her ordination, another important event in Presbyterian history. In 1965, the year of the Selma marches and the first campus protests against the Vietnam war, Henderlite (1905–1991) was ordained a Minister of Word and Sacrament.

On the anniversary of her ordination last year, the Rev. Peggy Howland shared historic photos and articles on her ordination. Ordained on October 19, 1958, at the Union Church of Bay Ridge, The New York Times carried the story the next morning. The headline read, "Presbyterian Church Gets Woman Minister."

Other important names and dates include:

There are other pioneering women whose names are not in record books, including new immigrant women who, even today, are becoming the first women in their ethnicities and cultures to be ordained in the church. There are experienced and new clergywomen, ruling elders and deacons, who are charting new paths in this changing environment in the church.

We follow in the footsteps of many named and unnamed women who have steadily and faithfully spread the good news of Jesus Christ, and they have significantly impacted our church, our community, and the American culture.