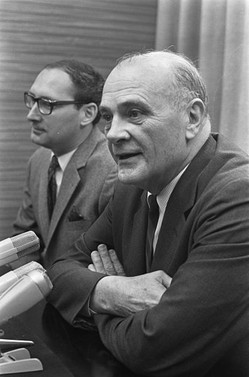 Transitions don’t always go smoothly, and very often vital resources unintentionally slip through the cracks in the process. Such was the case with the Eugene Carson Blake Scholarship.

The scholarship is for students from the United States who show promise for church leadership to attend the Ecumenical Institute at Bossey, Switzerland. Recipients participate in a four-month intensive graduate program that exposes them to the full spectrum of Christian traditions and explores the ecumenical and mission challenges churches face today.

Yet over a period of years the Reverend Dr. Dagmar Heller, academic dean at the Institute, observed that no applications were coming in. “I had not seen anyone utilizing the resources from the Blake Scholarship fund,” she said.

It seems the annual scholarship, created through a fund in the mid-1980s after the death of Eugene Carson Blake, former Stated Clerk of the United Presbyterian Church in the U.S.A., had gotten shelved.

“Over time, as staff and administrative changes occurred, institutional history and memory regarding the scholarship diminished, along with paperwork,” said the Reverend Melissa Garrett Davis, coordinator of ecumenical networking and resources in the Presbyterian Church (U.S.A.).

That is, until now.

“I didn’t know much about Eugene Carson Blake or the scholarship until I received an email from Melissa Davis,” said Benzinger, originally from Lewisville, Texas. “Even after I applied, I had this feeling in my gut that it was crazy to think that I would or could be going to Switzerland. A couple of months later I received a letter saying that I had been admitted. … I was thrilled!”

Slater, too, was please at being selected. “I felt even more special, blessed in fact, when I was notified that I had been awarded the scholarship because it was not an opportunity that I was seeking out or searching for,” said Slater, whose former career was in higher education.

The initial contribution to the fund supporting the Blake scholarship was made into the Ecumenical Trust of the World Council of Churches (WCC) by friends of Blake, who served as the second general secretary of the WCC. The Ecumenical Institute at Bossey is a part of the WCC. A different scholarship to attend Bossey also was awarded to PC(USA) student, Seo Young Kim, from McCormick Theological Seminary.

“We are fortunate to have such incredible young leaders who recognize the importance of being a witness to the unity of the church, especially around issues of human suffering and brokenness,” Davis said. “The education and experience they receive at Bossey will help ensure that the Presbyterian Church (U.S.A.) continues to be a leader in the ecumenical movement.”

A tax deductible contribution to support the Eugene Carson Blake Scholarship can be made by visiting https://www.presbyterianmission.org.donate/make-a-gift/-info/102. Checks can be mailed to the Office of the General Assembly, Attn: Melissa Davis, 100 Witherspoon Street, Louisville, Kentucky, 40202.