History made as PC(USA) elects Co-Moderators for first time 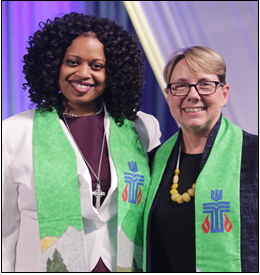 On the 60th anniversary of making women eligible to be pastors, and the 85th anniversary of ordaining its first woman elder, the Presbyterian Church (U.S.A.) made history again Saturday, electing two women as co-moderators for the first time.

Denise Anderson, a pastor from National Capital Presbytery, and Jan Edmiston, a presbytery executive from Chicago, were overwhelmingly elected Co-Moderators of the 222nd General Assembly (2016).

By the way, it also was the first-ever election of co-moderators, which was possible because of a change made in the standing rules just two years ago.

Moreover, in the history of the denomination, women had never been elected as both moderator and vice moderator.

“This is simply historic,” said Anderson, the pastor of Unity Presbyterian Church in Temple Hill, Maryland. “It is the first time our denomination has elected co-moderators. Either way the wind blew tonight, you were going to have co-moderators.”

During a press conference after the election, she also noted that she is the youngest person ever elected as moderator or vice moderator.

“This is very humbling,” said Edmiston, associate executive presbyter for ministry at the  Presbytery  of  Chicago. “This is the 60th anniversary of the ordination of women to Word and Sacrament and the 85th anniversary of the ordination of women as ruling elders. This is support for the leadership of women. We will be modeling a new way to be the church in the 21st century.” Anderson and Edmiston defeated Adan Mairena, a teaching elder and new-church development pastor from Philadelphia, and David P. Parker, a ruling elder and lawyer from North Carolina, by a margin of 76 percent to 24 percent.

In speeches and during the question-and-answer period after the election, both teams emphasized that this is a time of transition and opportunity for the PC(USA).

“We want you to remember this number: 104,” Anderson said. “That is the number of weeks between now and the next General Assembly. We pledge to show respect and compassion. Listening is more than waiting to talk.”

Edmiston explained that she was told this is the terrible time  to stand for co-moderator, with congregations leaving the denomination and with the retirement of Stated Clerk Gradye Parsons. But “God works best in times of transition, and chaos and anxiety,” she said. “It is in times like these that the Spirit shows us what God can do, which we cannot do ourselves.”

In the same vein, Mairena explained how he learned from his parents, natives of Honduras, that the denomination is a connectional one that enables people to live out their passions for social justice.

Parker expanded upon the value of working together in planning for the church 25 years from now, when half of those who are members now will have died. “We must address who will we have and what will the world and the church look like,” he said.

All agreed that part of the historic value of the PC(USA) is that it makes it possible for people who disagree to come together in disagreement as well as in agreement.

“This job is not about who is gifted for it, but who is called to it,” Edmiston said.

Parker noted that the PC(USA) is one of the few institutions in which people who aren’t in agreement can come together to express their viewpoints, then break bread together without rancor.

In answering a question about congregations that have left the denomination, Anderson said: “The most important thing that Christ gets the glory. I want you to stay, but church will still go on, and Christ will still be its head.”

Edmiston and Anderson acknowledged that how a co-moderator model will work is yet to be determined.

“We are going to have to work out the nuts and bolts,” Anderson said. “This has never been done before.”

They said each of them expects to handle about half of the moderator’s role.

“We don’t have to be at everything together,” Edmiston said, “but there is the advantage that people always want to see the Moderator, not the Vice Moderator. Now, whichever one of us they get, it will be the Co-Moderator.”