With repentance and resolve, Assembly vows to keep children safe

Parsons offers heartfelt apology for failures of the past 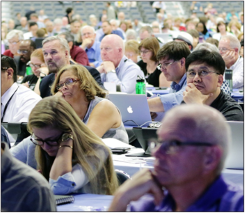 With tears and prayer – and a remarkable apology from Stated Clerk Gradye Parsons – the 222nd General Assembly(2016) of the Presbyterian Church (U.S.A.) on Wednesday unanimously passed a comprehensive policy to protect children, youth and vulnerable adults.

Kris Schondelmeyer, a Presbyterian pastor from Toledo, Ohio, who has become the face of abuse victims in the church, had told his horrific story of being sexually assaulted by a chaperone at a national Presbyterian youth conference, and the ensuing cover up, to the General Assembly Procedures Committee as it considered the policy.

Immediately after it was adopted, Parsons left his seat on the dais, stepped to the podium and said, “As Stated Clerk of the General Assembly, I want to offer to Kris a public apology for what happened to him.”

Parsons said he had made Schondelmeyer’s acquaintaince several years ago and witnessed his uphill battle to find justice and come to healing.

“I offer a public apology for how hard it was to find justice,” he said. “I offer our commitment that his child and my grandchild will be safe.”

Mary Lou Cox, chair of the General Assembly Procedures Committee, was in tears as she introduced the policy for the assembly’s vote.

“This place we gather is sacred, in part because it is where we can express in safety the brokenness and pain of the human condition,” she said. “We act in destructive ways, even to the most vulnerable among us.”

Cox explained that the policy is a manifestation of our need to confess our sin.

“We were broken open as a committee because of Kris’ testimony,” said Lisa Miller, a Ruling Elder Commissioner from National Capital Presbytery.

Olivia Campbell, a Young Adult Advisory Delegate from the Presbytery of Donegal, offered a concluding prayer:

“We look at the cross and see a big mess. Redemption is not always pretty. Give us courage to use words like rape and sexual assault in our churches, so that we will not make light of it anymore and acknowledge [that] repentance is not just words, but a choice to change our lives.”

The  Child/Youth/Vulnerable Adult Protection Policy and Procedures was developed in response to the mandate that all councils must adopt a child  protection policy. It was developed by a Task Force for Safe and Sacred Space in consultation with legal and insurance experts. While it is now policy for the General Assembly, it is also available as a comprehensive model for congregations as they develop their own child protection policies.