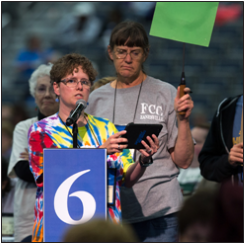 Several recommendations that would have changed the structure and operation of the Presbyterian Church (U.S.A.) were rejected Thursday by the 222nd General Assembly (2016). Commissioners instead adopted a compromise plan that would create a vision team and a separate administrative commission to address those matters.

By a vote of 480-86, commissioners authorized the creation of a 12-member Way Forward Commission, which would have sweeping powers “to study and identify a vision for the structure and function of the General Assembly agencies of  the PC(USA).”

The commission would have authority to “describe and implement a General Assembly-level staffing pattern that will accomplish its vision,” and be authorized “to engage a qualified examination team to assess institutional performance both internally among the agencies and externally as they interface with the congregations.”

Ruling Elder Commissioner Steve Aeschbacher of SeattlePresbytery, the moderator of the assembly committee on The Way Forward, praised the work and commitment of national staff, who he said “are doing phenomenal work with ever- decreasing resources.”

However, Aeschbacher continued, recent reviews of the Office of the General Assembly and particularly the Presbyterian MissionAgency persuaded the committee that urgent action is needed to address “expressed concern for the culture and administration of the PMA and OGA bodies, and posited a hope for change that will make us a more efficient, inclusive, culturally sensitive and visionary denomination.”

Prompted particularly by the PMA review, which was harshly critical of the processes and management culture of that agency, Aeschbacher said: “There is an urgency about getting on with our life together in a new way, to look past current crises to God’s future … It’s clear that more needs to be done to help PMA.”

Way Forward Committee Vice-Moderator Cynthia Jarvis of Philadelphia Presbytery agreed, saying, “These are systemic issues that cannot be kicked down the road until the next assembly.”

“We heard about systemic issues in the PMA,” Botejue said. “We believe this commission will lead to healing.” Allmer said a commission “will allow actions to be taken without having to wait for the next General Assembly.”

The Assembly also created, by a vote of 547-27, a 15-member 2020 Vision Team to “develop a guiding statement for the denomination and make a plan for its implementation.” The hope, Aeschbacher said, “is that the team will help us establish and reclaim our identity as the PC(USA).”

Jarvis described the Vision Team as “a foot in the water, a first step in the hope that is before us because Jesus has gone ahead.” She urged the assembly to create the Vision Team “to help us enter the future God is giving us anew with trust and love. We urge you in love and trust to take this first step.”

The immediate future-oriented administrative commission and the longer-range vision team will interact with the previously scheduled All-Agency Review Committee, which on a regular basis looks at the roles and interrelatedness of all six PC(USA) national agencies as well as mid councils (synods and presbyteries) and congregations.

“These three groups [commission, vision team and all- agency review] all have distinct responsibilities,” Aeschbacher told the commissioners, “but we hope they will interact with each other regularly.”

The assembly disapproved a package of seven overtures from Foothills Presbytery, and similar overtures from de Cristo and Grand Canyon presbyteries, that would change the way business is brought to the General Assembly and the frequency with which the assembly deals with social-witness policy proposals. They also would have set stricter requirements for bringing business  to the assembly and for amending The Book of Order. That vote was 505-35.

“The committee was impressed by the motivation behind the Foothills overtures, and wishes to express its profound appreciation for the ideas they advanced,” Aeschbacher said.

Despite the disapproval, Teaching Elder Commissioner Deborah Foster of Foothills Presbytery expressed her presbytery’s “profound gratitude for the way The Way Forward Committee considered these overtures, and for hearing our concerns.”