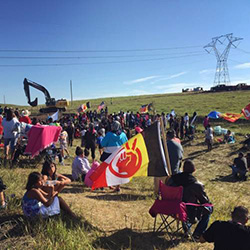 Protesters congregate next to a construction site for the Dakota Access Pipeline on Monday morning, as a crew arrives with machinery and materials to begin cutting a work road into the hillside. The flag in the foreground belongs to the American Indian Movement. —by Daniella Zalcman

The Rev. Dr. J. Herbert Nelson, II, Stated Clerk of the General Assembly of the Presbyterian Church (U.S.A.), in conjunction with the Rev. Irvin Porter, associate in the Office of Native American Intercultural Congregational Support, issued a statement today in support of the Standing Rock Sioux protest of a crude oil pipeline set to skirt the northern border of the tribe’s reservation lands. A breach, they say, is a threat to the Missouri River, the source of the tribe’s drinking water.

Protestors have gathered near Cannon Ball, North Dakota since April, hoping to stop the construction of the 1,170 mile pipeline scheduled to move crude oil from the Bakken oil fields in western North Dakota to refinery facilities in Illinois.

In the past few weeks local protestors, who numbered in the hundreds, have been joined by thousands of representatives from Native American tribes across North America in “prayer camps,” prompting state officials to remove the camps’ water supply Monday. Activists point to the ongoing struggle for tribes to preserve their land from enduring further environmental harm.

The statement from the Stated Clerk and Office of Native American Intercultural Congregational Support below recognizes the strides the PC(USA) has recently taken to make amends for its role in administering Native American boarding schools and perpetuating the “Doctrine of Discovery” in the United States, hoping further discussion “raises awareness within the church of these issues.”

It has been estimated that more than 4,000 people have gathered at Camp of the Sacred Stones, three separate prayer camps, along the western side of the Cannon Ball River north of Cannon Ball, North Dakota, near the border of the Standing Rock Sioux Indian reservation’s northern border. The purpose of the protests is an attempt to stop Dallas-based company Energy Transfer from piping Bakken oilfield crude underneath the Missouri River, the main source of drinking water for the tribe.

Support for the Tribe’s efforts has now come from many Tribes across the country and internationally. The Congress of American Indians has weighed-in, as well as tribes from Canada and throughout the U.S.A. They are rallying around the Standing Rock Sioux’s efforts to keep the Dakota Access oil pipeline from crossing under the Missouri River and passing within a half mile of the reservation, crossing treaty lands. The Tribe is suing the U.S. Army Corps of Engineers for its approval of the pipeline without a comprehensive environmental and archeological review. A decision by the Federal Circuit Court is pending September 9th.

The peaceful and wholesome nature of the protestors has been made confrontational as the governor recently issued a declaration of emergency. Roadblocks and detours are guarded by heavily armed law enforcement who have come in from around the state because of the governor’s declaration.

The Standing Rock Sioux tribe’s position identifies with public opinion being expressed by the Cannonball River camps. Both the Tribe and protestors, “water protectors,” expressed concern that the roadblocks are unfortunate and unnecessary, and only raise the already high tension between the state and Native protesters.

The 222nd General Assembly (2016) of the Presbyterian Church (U.S.A.), meeting in Portland, Oregon in June, passed two overtures which effect the 95 Native American Presbyterian churches across the country.

It has become clear that the PC(USA) is becoming more aware of the struggles that Native American Presbyterians and all Native Americans have faced in the past and are dealing with today. It is my hope that in discussing these issues across the church an impact can be made that not only raises awareness within the church of these issues, but also generates action by Presbyterians.

“May the warm winds of heaven blow softly upon you
And the Creator make sunrise in your hearts.”
(Cherokee Prayer)