Home News Presbyterians called to be healers and table turners

Presbyterians called to be healers and table turners

In a time when immigrants are increasingly stigmatized and threatened with deportation, Teresa Waggener, an immigration attorney for the Presbyterian Church (U.S.A), asked a group of synod and presbytery leaders:

“How can we be the hands and feet of Christ? How do we reach out and support immigrants and refugees without doing any harm or putting them in danger?”

She and co-leader Amanda Craft, manager of advocacy, both work in the Office of Immigration Issues in the PC(USA)’s Office of the General Assembly. Their workshop, titled “We Choose Welcome,” was part of the 2017 Mid Council Leaders Gathering, October 13–17 in St. Louis.

Waggener and Craft offered guidelines for engaging congregations in immigration and refugee work. Lifting up Jesus as a model, they challenged mid-council leaders and other Presbyterians to be healers and table turners.

Healers are those who build relationships with immigrant populations and organizations that are trying to help them. Table turners engage in advocacy — meeting with city councils, writing letters to Congress, talking with mayors and law enforcement officials.

As the two workshop leaders responded to questions and comments from workshop participants, it became clear that most of those in the room were already deeply engaged — or open to engagement — with immigration issues.

The lively conversation showed that Presbyterians from New York to Louisiana to Idaho and rural Pennsylvania are seeking ways to welcome and support people in their communities — people from places as diverse as Africa, Asia, the Middle East, and Central America.

“There’s a mountain of hypocrisy in this country” about immigrants, remarked Anthony Barta from the Presbytery of Western Kentucky. He talked about seeing large groups of Hispanic and Latino workers brought in to work tobacco crops and pick up trash on federal highways, while at the same time immigrants and refugees are increasingly viewed as threats to the security and jobs of U.S. citizens.

Joe Hill, from the Presbytery of the Pines, said, “We don’t have the obvious immigration issues in our presbytery” — for example, raids by Immigration and Customs Enforcement (ICE). “But we do have LaSalle Detention Center” — a for-profit prison in Jena, Louisiana, that houses undocumented immigrants awaiting court hearings and possible deportation.

“How do we minister to the people in the detention center?” Hill wondered.

Step one, Waggener suggested, is to find out if there’s already a ministry with detainees to plug into. In many communities located close to detention centers, there are active visitation ministries.

Some visitors may be denied access to the detention centers, but “pastors and attorneys are always allowed access,” Waggener said. 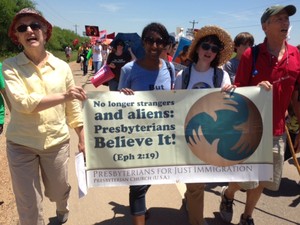 Teresa Waggener (third from left) and other Presbyterians joined a protest in front of the South Texas Family Residential Center in Dilley, Texas. —Photo by Randy Hobson

“Detention visits tend to push us into places of solidarity and action,” Craft said. Healers may become table turners when they see the conditions inside these prisons.

She noted that while the vast majority of detainees are Spanish speaking, those who have the most difficulty in prison are Africans and LGBTQ inmates. They are the ones most likely to be endangered by racism and intolerance of guards or other detainees.

She suggested that churches use the resources they have—educational buildings and retired school teachers — to offer classes for English Language Learners (ELL). These could also be expanded to include history and civics classes to prepare refugees for naturalization.

Craft sugggested that congregations consider ministries with refugees around mental health issues. “These are populations who have been through lots of trauma,” she said.

Sarah Moore-Nokes, from the Presbytery of Winnebago, said that multiple congregations in her presbytery were talking with other organizations doing immigration ministry. “We’re looking for ways to undergird and support their work. We’re learning and listening.”

But she observed that “the hardest thing for Presbyterians is that we’re always in charge. We like to run things. How can we be supportive and helpful without being in charge?”

In response, Waggener told the story of some immigrants who were asked by a group of potential helpers what kind of support they needed. “They said what they most needed was babysitters so they could meet and organize.

“They didn’t get many takers,” Waggener said. “We need to be willing to be the babysitters.”