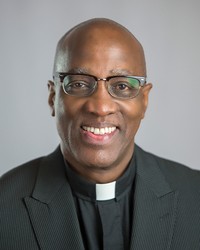 General Stated Clerk J. Herbert Nelson, II issued a statement today from the Holy Land – where he is traveling with a delegation of Presbyterian Church (U.S.A.) leaders, criticizing President Trump’s decision to officially recognize Jerusalem as the capital of Israel and  to instruct the U.S. State Department to begin planning to move the U.S. Embassy from Tel Aviv to Jerusalem.

Nelson’s statement is similar to one issued by the National Council of Churches, which had been in contact with him earlier. In its statement , the NCC praised the witness of the PC(USA) delegation and asked for prayers for its safety.

The full text of Nelson’s statement:

Moving the U.S. embassy from Tel Aviv to Jerusalem would be a grievous mistake. For Christians concerned with peace and justice, Jerusalem must be a city shared by three faiths and two peoples. As long as Israel occupies East Jerusalem and restricts Palestinian human rights, to designate Jerusalem as Israel’s capital is to endorse the violation of international law. We pray for “the peace of Jerusalem” as Christmas approaches, but peace is not achieved by unilateral claims or annexation. There is a profound moral stewardship of the holy sites in Jerusalem that requires the shared decision-making of Christian and Muslim Palestinians as well as Jewish Israelis. Behind the many General Assembly statements affirming Jerusalem to be a shared city is the conviction that Jesus still calls us to be peacemakers.

Claiming Jerusalem as the capital for one people not only damages hope for peace between Israeli and Palestinians, but deepens religious tensions among Muslims, Jews, and Christians. Each of our religious traditions has a long memory. Back in 1947, the original UN plan for two states called for Jerusalem to be an international city, so that religious coexistence there could be a model for tolerance around the world. The nations of the world have respected that good vision by keeping their embassies in Tel Aviv until a just peace can be achieved. For the U.S. government to act alone in the interests of one side is to end any claim that we can be an “honest broker” in a peace process to end the occupation of Palestine. It is for these reasons that we go on record as a church to express our deep disagreement with this action by our government. In this year of painful anniversaries for the Palestinians, it would be another betrayal to abandon the equal claims of both the Palestinians and the Israelis to Jerusalem, a city of historical and spiritual significance shared by Christianity, Islam, and Judaism.