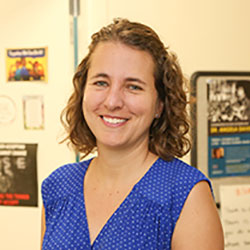 A Google search while gathering material for her master’s thesis is what first connected Emily Welty with the World Council of Churches (WCC).

With a Christian faith rooted in both the Presbyterian and Mennonite traditions, the young woman gravitated naturally toward participation in a global ecumenical community—especially one committed to working for peace and justice.

“We’re called to speak out about issues of suffering in the world,” Welty says. “Our responsibility as Christians is not limited to our local community or to what we do on Sundays.”

A decade of involvement with the WCC has made 38-year-old Welty, who is director of peace and justice studies at Pace University in New York City, one of a new generation of ecumenical leaders in the Presbyterian Church (U.S.A.).

“She is extremely well respected, and WCC colleagues continue to express appreciation for her diplomacy, political astuteness, ecumenical commitment, and impact,” says Robina Winbush, director of ecumenical relations in the PC(USA)’s Office of the General Assembly.

As vice moderator of the WCC’s Commission of the Churches on International Affairs (CCIA), Welty helps churches respond to international conflicts, climate change, migration, and other pressing issues. She also serves as the main representative to the United Nations for the International Peace Research Association (IPRA).

Advocating for a treaty to ban nuclear weapons is a major focus of Welty’s work for both IPRA and the WCC.

Interviewed the day before leaving for WCC-related meetings in Kenya and Ethiopia, Welty said the CCIA meets in various places around the world in order to “change the perception that Geneva [headquarters of the WCC] is the center of the ecumenical movement.” Meeting in different places also helps commission members consider “how the approaches of various churches to current issues are affected by their contexts.”

As the commission keeps in touch with Christians at the grassroots level, Welty explains, “we can direct the attention of the ecumenical movement to crises as they emerge”—by drafting statements or developing resources to help congregations respond.

Welty grew up in Michigan and was confirmed in a Presbyterian congregation there. Graduating from the PC(USA)-related College of Wooster in Ohio about the time of the U.S.-led invasion of Iraq, she began grappling with how churches should respond to what she believed was an unjust war.

“After college, I was looking for a Christian community that was prophetic on issues of violence,” she says. Her search led her to the Mennonite Church, one of the historic peace churches. She also discovered, coincidentally, that her family had roots in that tradition.

Now Welty is active in both a Mennonite and a Presbyterian congregation. In her WCC involvement, she represents the PC(USA).

Welty had never heard of the WCC until she began working on a master’s thesis on apartheid in South Africa as a graduate student at American University. Her research uncovered a pivotal statement by the WCC from the 1980s that denounced apartheid as contrary to the will of God.

“I thought it was such a powerful statement—exactly what the faith community needed to say,” Welty says.

A Google search led her to the WCC website, where she found a call for young adults to serve as stewards at the council’s 2006 assembly in Porto Alegre, Brazil. It was the day before the deadline for applications, but Welty scrambled to get together the necessary paperwork and endorsements from the PC(USA). She is grateful that the WCC accepted her application.

In Porto Alegre, she and the other stewards helped with logistics of the gathering while learning about issues important to the global church. It was inspiring, she says, “to be around young people from all over the world who were passionate about social change and also about their faith.”

Since then, Welty has become a firm believer in the potential of the ecumenical movement to bring about positive change. “People are so much more powerful when they’re connected to other very different people who care about the same things,” she says.

She draws on that power in her advocacy for a nuclear weapons ban. “What I do is raise the voice of people of faith.”

While secular groups cite nuclear warfare’s dire consequences for public health and human well-being, “I say that nuclear weapons represent sin,” Welty says. Stockpiling these weapons and relying on them for our defense is “contrary to how we are called to act as Christians.”

Nuclear weapons, she continues, “represent an orientation of distrust toward other human beings. Nuclear deterrence is based on the idea that the way to interact with strangers is to threaten them.”

Working globally and ecumenically on issues such as nuclear weapons strengthens the church’s witness to the world, Welty believes.

“In a time of rising nationalism, it’s more important than ever to proclaim that the love of God is broader than this. God’s demand that we work for justice transcends national boundaries.”