Workshops and prayer over national issues cap off second day

The Rev. Dr. J. Herbert Nelson leads a discussion on per capita at the Mid Council Leaders Gathering in Chicago. Photo by Rick Jones

For the second day of the Mid Council Leaders Gathering in Chicago, meeting activities were suspended briefly as a result of high profile news outside the conference walls. Upon word of Brett Kavanaugh’s senate confirmation to the U.S. Supreme Court, the Rev. Dr. J. Herbert Nelson, II, Stated Clerk of the Presbyterian Church (U.S.A) led the group in prayer.

“Gracious God, we ask for your guidance as we deliberate direction of the church and how we walk in these times by faith and not by sight. There are people in this room who are hurting and struggling, people who have been victims of violence,” he prayed. “Help us to discern our way forward. We’ve had two hard days with significant struggles. We need you Lord Jesus.”

The morning began with a historical look at per capita and the realities moving forward. Nelson shared his thoughts and the need to “re-tool the church.” 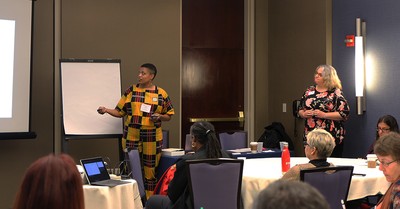 Denise Anderson and Molly Casteel conduct a workshop on avoiding the roadblocks in anti-racism work. —Photo by Rick Jones

“We are at a different time now. We cannot have strong churches without strong mid councils and leaders who are who are willing to do the same thing on the ground in the local community as we did in St. Louis,” he said. “Most of us have not been trained in that kind of action. How do we re-tool the basics of our leadership to deal with contextual realities of our time? It takes money and commitment to do that.”

Nelson told the group the denomination is losing members and recognizes its impact on mid councils.

“I understand the struggles you are going through. Churches are struggling and dying. We’ve felt that same pain too,” he said. “It’s not just about re-tooling mid councils, it’s about re-tooling every institution within the denomination for 21st century ministry. How do we re-tool our denomination that has taken a hard hit and is struggling, to continue being faithful and moving forward?”

Nelson says the PC(USA) can become a turnaround denomination, adding that it won’t be easy and will demand commitment from everyone.

“When we talk about per capita, it’s not a money grab, it’s about rebuilding the institution and faith that brought us, our children, and parents to where we are,” he said. “It’s about perpetuating something positive on this side of heaven. We won’t be those who failed our ancestors, but we will know we put our noses to the grindstone and have worked in every way we could to live each and every day.”

Attendees spent a part of the day in workshops ranging from discussions on racism and spirituality to a session on uncovering the truth for immigrant neighbors. 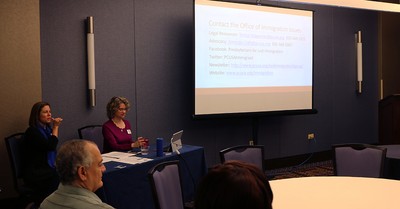 Amanda Craft and Teresa Waggener with the PC(USA)’s Office of Immigration lead a workshop at the conference. —Photo by Rick Jones

“We are in a time in our country where many people are afraid,” said Teresa Waggener with the Office of Immigration in the Office of the General Assembly. “There are many reasons to be concerned for families and individuals at risk of being forced to leave the states.”

Co-worker, Amanda Craft, shared the realities immigrant families and refugees are facing when they come to the U.S. seeking a new life.

The second day wrapped up with a group discussion on the 223rd General Assembly with overall positive reports on the theme, actions and spirit. A number of mid council leaders offered suggestions for future assemblies.

Co-sponsored by the Office of the General Assembly and The Board of Pensions of the Presbyterian Church (U.S.A.), the Mid Council Leaders Gathering is for presbytery and synod executives and stated clerks.