Immigration, dismantling racism among the topics of discussion

More than 100 moderators from across the country gathered in Louisville, Kentucky for the Moderators’ Conference. Photo by Rick Jones

Policies and procedures, workshops and worship made up the two-day Moderators’ Conference in Louisville, Kentucky over the weekend. The Presbyterian Church (U.S.A.)’s Office of the General Assembly hosted 110 moderators from across the country.

Worship services were led by the Co-Moderators of the 223rd General Assembly, the Rev. Cindy Kohlmann and Ruling Elder Vilmarie Cintrón-Olivieri. In addition to presentations from other PC(USA) agencies, attendees were presented with the necessary tools to officiate meetings in their own presbyteries and synods. 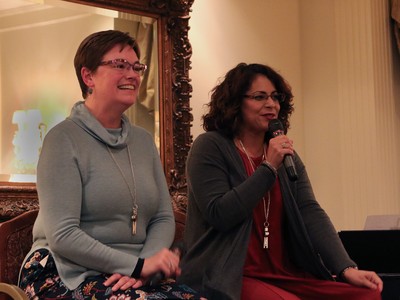 Most of Friday afternoon was spent educating the new moderators on how to conduct meetings, including a review of Robert’s Rules of Order and proper procedures for handling motions, substitute motions and discussion. Much time was dedicated to ensuring inclusivity and civility in meetings.

During the Friday evening meal, the attendees had an informal conversation with Kohlmann and Cintrón-Olivieri with a question and answer session. The two were asked questions ranging from their ministry call to what they saw as some of the biggest issues facing the church now.

Cintron-Olivieri felt immigration was high on her list of issues. “I had the blessing of going to see the work local congregations are doing at the border, receiving those walking for weeks that are tired, starving and looking for something they need. What churches are doing is beautiful, wonderful, daunting and needed.”

Both told the group they didn’t expect to be where they are now.

“This weekend marked the 19th anniversary of my ordination. I never would have imagined that this was part of the journey,” said Kohlmann. “I have no idea what God will do next, but my intention is to listen for God to make that clear.”

The conference continued Saturday with a review of General Assembly actions and workshops focused on a series of topics including immigration and dismantling racism.

During the session on Immigration, Teresa Waggener, manager for Immigration Legal Resources with the OGA, said the need for pastoral care among immigrant families is great. 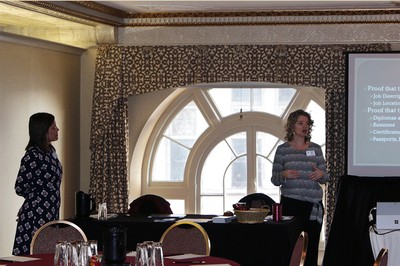 Amanda Craft (left) and Teresa Waggener (right) with the OGA Office of Immigration Issues during the conference. —Photo by: Rick Jones

“Families end up separated in multiple countries, not knowing if other family members are even alive,” she said. “One woman found after she came to us, that she had two daughters in two different countries. It took five years to get her children here and one of them was 17 and pregnant.”

During worship on Saturday, Kohlmann told the group it has been easy to follow Jesus Christ in years past, but as culture has changed, people have not seen the urgency to follow. “But we have nothing to fear, because death is not the end. We know even if our earthly tent is destroyed, a heavenly home is being prepared. Nothing can separate us from the love of God and Christ Jesus.”

The conference concluded with a showing of the OGA documentary “The Genesis of Exodus”, which explores the root causes of migration from Central America.