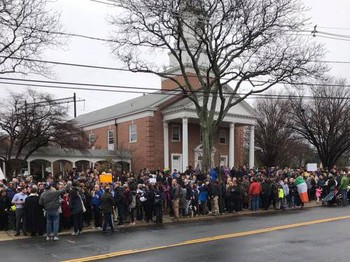 More than 500 people gather at First Presbyterian Church in Metuchen, New Jersey, to voice opposition to the arrests of immigrant Christians for possible deportation —Justin Karmann

The First Presbyterian Church of Metuchen (“FPC”), in Metuchen, New Jersey, had a special reason to celebrate Thanksgiving. Roby Sanger was home.

Sanger, an Indonesian Christian and long-time member of FPC, has spent the last 10 months in custody, facing deportation. Sanger and his family have been members of the Indonesian fellowship that meets at FPC for 22 years.

“I received a call November 14th from Roby’s wife saying he was going in for a bail hearing. He was originally scheduled to go in with his lawyer in two weeks. But his wife said he’s going in now, so I called his lawyers, and he went in with no representation,” said the Rev. Justin Karmann, associate pastor. “We feared the worst, and received a call, saying that if we could come up with $7,500 and can pay his bail, he would be released. We were elated and made the necessary arrangements to get the bail money immediately.”

Last January, Sanger was dropping his daughter off at the high school when he was picked up by Immigration and Customs Enforcement (ICE) agents. His arrest generated a lot of opposition from FPC and other community groups. He remained in custody until his release on Nov. 15. FPC has been ministering to Sanger and his family since they joined in 1996 and has worked for his release for more than 10 months now.

Two additional Indonesian Christians were also approached by agents last January. Gunawan Liem, who lives in Piscataway, was also arrested while taking his child to school. Harry Pangemanan of Highland Park sought sanctuary at a nearby church, avoiding arrest.

Karmann found that securing Sanger’s release was not an easy task.

“I took multiple trips to the ICE office and was turned away for the smallest issues and infractions,” he said. “I witnessed other families trying to pay for their loved one’s bond and being denied for various reasons. It seemed unjust and was very frustrating to see how that took place.”

After two days of being led through loophole after loophole, Karmann said they picked Sanger up during a blizzard. “His daughters went with us. That first hug was a reminder of why we did this. We then took him home to his wife and that was a moment where everyone was touched.”

On Sunday morning, Sanger was brought before the congregation and received a standing ovation.

“For so many members, they didn’t even know who he was. They had never met him but knew of him through our activism. They had played a large role in protecting him and his family and advocating for his release and didn’t know who he was,” said Karmann. “They had been working with us for 10 months. It was incredible and there wasn’t a dry eye in the choir. It was a beautiful thing and none of this would have been possible without our lawyers, congregation, community and rallying to make this happen.”

The initial arrests in January generated a lot of attention from local, state, and federal government representatives. A week after the arrests, the Rev. Dr. J. Herbert Nelson, II, Stated Clerk of the Presbyterian Church (U.S.A.), traveled to Metuchen and met with church leaders and Sanger’s family.

“Our congregation was a little ambivalent about this whole process until one of their own was taken and the way it transpired was frustrating and outrageous. You don’t know what you don’t know and when you experience something like this, it changes your perspective,” said Karmann. “We have biblical text after biblical text advocating for this. Because there has been a task force that has been advocating for us to be a sanctuary church and care for immigrants, we were ready.”

Karmann says the congregation has kept the family going, providing meals and raising nearly $28,000 to cover bills. The congregation has also found other ways to support the family from taking the daughters to the detention center to see their father, to financial, emotional, and spiritual support, as well as embracing the Sangers as the church’s family.

Nancy Leardi, FPC’s director of Christian education, has been working closely with the Sangers throughout the ordeal.

“The Sanger family has and will continue to inspire me to tears. When Roby was taken, we knew the big issue was how will they meet their financial and emotional needs. They allowed me to assist them in finding work. My pestering of texts and phones calls were always received in joy and kindness,” she said. “Accompanying the girls to visit their father on various occasions was an emotional journey for all of us. When I would reach out to our loving congregants to assist with their meals, carpooling, auto repairs and work situations, our church family stood tall. We continue to stand with the Sangers in love and hope.”

Karmann says FPC is now waiting on the outcome of Roby’s appeal. “It’s a waiting game for right now and we are trying to be as best prepared as possible for all outcomes.”

To learn more on how to support immigrants, click here. To find out about the OGA family care plan, click here. For more information about First Presbyterian Church in Metuchen, click here.