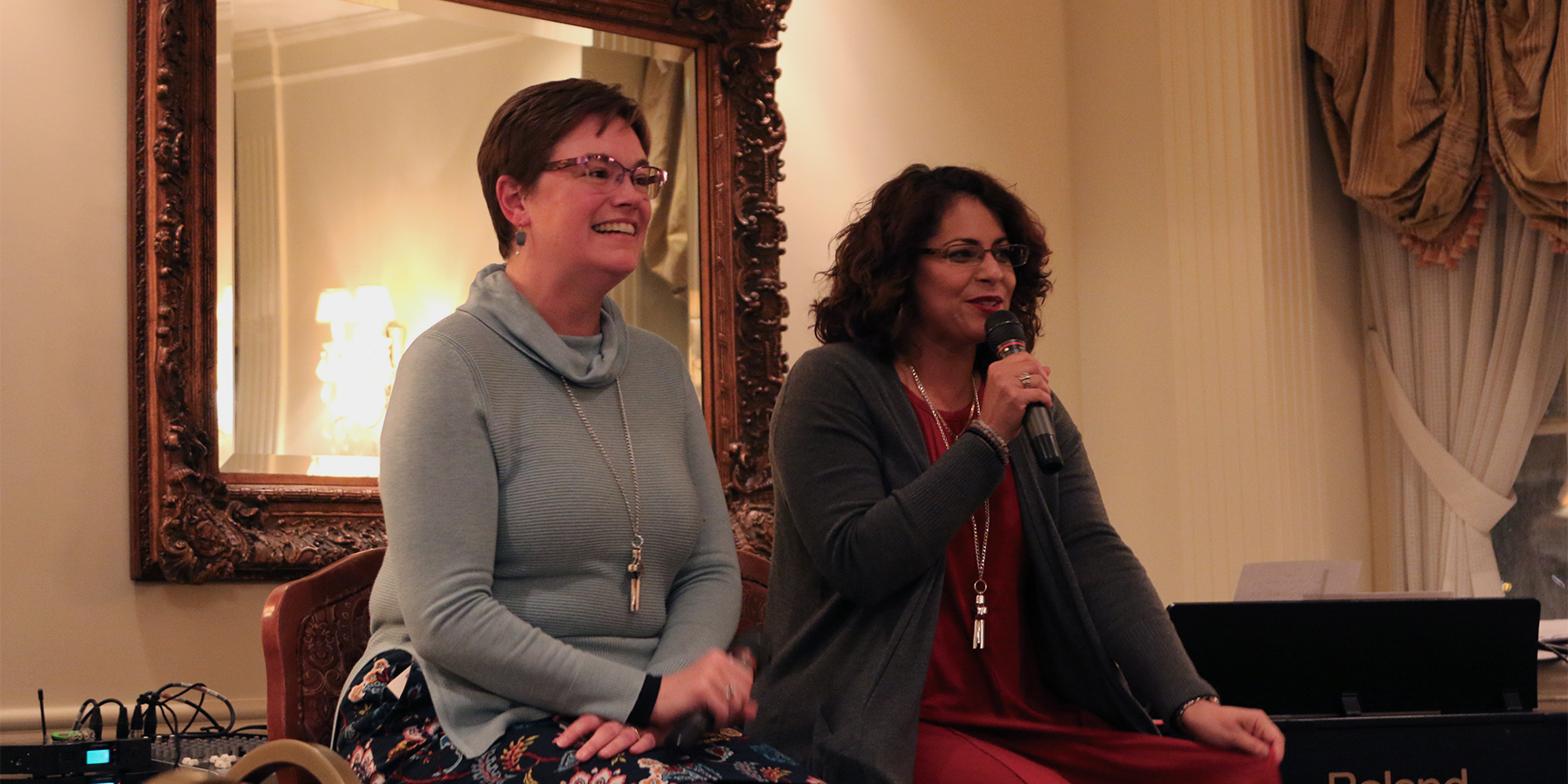 Ask the Co-Moderators of the 223rd General Assembly what they think of their first six months in office and they will tell you a lot has changed since they were elected in St. Louis last summer. Their election came seven months after they decided, in a telephone call, to stand together as co-moderators.

“As we began talking, and I heard Cindy’s vision, love for the church and the passion in her voice, I decided to stand with her,” said Ruling Elder Vilmarie Cintrón-Olivieri. “We both felt called to do this together and left it to the church to decide.”

Fast forward to the fall of 2018 and the start of the Moderators’ Conference in Louisville and the two were taking their few free moments to compare calendars and fill the many requests for their presence.

“I can’t imagine what it was like for a moderator/vice moderator pair,” said Cintrón-Olivieri. “All of the visits we are making and the work we are involved in is hard work. Having co-moderators is a model of self-care and a model of service to the church that is doable.”

On these rare occasions of being together, the co-moderators work to ensure they are able to meet the many requests for their presence.

“As we try to conduct the work of the church, we are trying to use the co-moderator model to reflect shared service,” said Kohlmann. “I think the spirit is moving and what we do now will look different down the road and that’s good.”

A few hours later, the two are enjoying an evening meal at the moderators’ conference followed by an informal question and answer session. The questions ranged from how they met to their view of the 21st century church. Asked about the issues that are tugging at their hearts now, both agreed immigration is at the top of their list.

“I had the blessing of going to Mission Presbytery and see the work local congregations and Mission are doing at the border, receiving those walking for weeks that are tired, starving and looking for something they need,” said Cintrón-Olivieri. “What churches are doing at the border is beautiful, wonderful, daunting and needed.”

Cintrón-Olivieri says the church must be a voice for the voiceless. “Whether we prefer someone else to do this for us or take it upon ourselves, we have to be up front doing this ministry. We also need to be more present, transparent and loving in whatever we do,” she said.

Kohlmann says her call to stand for co-moderator grew out of the immigration crisis and how it was impacting congregations in the northeast.

“How we treat the widow, orphan, stranger in our midst, is very central to my understanding of what it means to be a Christian,” she said. “The increased expression of intolerance and hate with each other has been in communities and ourselves a long time now and is being expressed in fatal and destructive ways. We are called to follow a God that is loving, and if we as a church are not able to express, show, speak and act in tangible ways to the love we have received so abundantly, then we are failing the God that loves us.”

As Christian denominations, including the PC(USA), see congregations getting smaller and smaller, the co-moderators are still hopeful and excited about what the future holds.

“The Bible talks about pruning and that seeds must fall to the ground and die,” said Kohlmann. “The decline in number is painful, but part of God’s pruning is because we have been complacent.”

Kohlmann says decline is part of the story of rediscovering the joy and the need.

“I see people and churches committing themselves to faithful discipleship. It may be five people feeding kids in school who can’t afford a lunch program,” she said. “It could be 1,000 people doing mission work locally, nationally and internationally. The stories, hope and possibilities are as endless as our God.”

Cintrón-Olivieri says the church is transforming and will look different, and she urges Presbyterians to trust that the Holy Spirit is in control.

“Membership decline has slowed. I think we are going in the right direction,” she said. “Our presbytery lost 11 churches in the last seven years. We went through a grieving and revisioning process. We came with a new vision, reflecting who we are now and not who we were 10 years ago.”

Cintrón-Olivieri says the church should approach newness with an open mind and heart and move from fear of the future to a vision of trust.

When asked how serving as co-moderators has changed them and what they envision for their futures, Kohlmann says she feels both bigger and smaller at the same time.

“Bigger in the sense of this amazing opportunity and honor of being invited by people to come and hear their stories and to be given that level of trust and privilege is very special,” she said. “Smaller in the sense that it is incredibly humbling. If not for the grace of God, there is no way I could be doing this and standing underneath the weight of this office.”

Cintrón-Olivieri has always seen herself as a high school teacher and says it was difficult to walk away from the classroom.

“I didn’t understand why God was taking me away from something that made me feel good as a person. It gave identity to what I did with my life,” she said. “But being with people, listening to their words and meeting them where they are, it changes you. I don’t know what it will be like two years from now because this work changes the way we perceive the world.”

Both agree the co-moderator’s life is about service to the Lord, not about status or power.