Wilma Scott closes out ministry with the Presbyterian Church (U.S.A.) 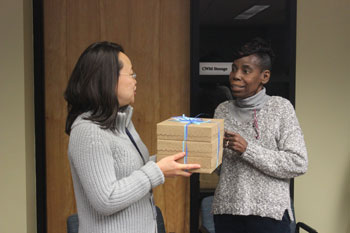 Wilma Scott (right) receives a gift from Jihyun Oh, manager of call process support in Mid Council Ministries, in recognition of her 31 years of service for the OGA. —Rick Jones

Staff members from the Office of the General Assembly gathered around one of their own last week to celebrate a person who doesn’t like attention. For thirty-one years, Wilma Scott has come to work at the Presbyterian Church (U.S.A.) offices in Louisville with one task in mind, helping Presbyterian ministers and leaders as best she can.

Over the years, Scott has worked with ministers, presbytery and synod staff, and helped churches fill vacant ministerial positions. She’s helped them understand and maneuver the CLC system and walked staff through the mountains of approval forms, logins, and passwords necessary to do the job.

Scott wrapped up her years of service on Friday. A Louisville native, she was hired by the church as it prepared to open its new offices in Louisville in 1988 and is one of the few who have been here since day one. The church offices are located near the Ohio River in downtown Louisville. Scott remembers what it was like before.

“There were warehouses here and the buildings had not been used for years,” she said. “When I saw the church office building, I was like, wow. I was amazed at what they had done with it.”

Once she settled in, Scott says there was a lot to learn.

“When I came in, I knew nothing about the Presbyterian church, nothing about their bylaws and structure. But over the years, I’ve learned how it works and it has truly been a learning experience. I’m trying to pass that experience down. I have just loved it,” said Scott. “There are no words to say how I feel about leaving because it’s so mixed, but somebody else needs to step up and step out and I need to spend time with family.”

Scott has a son and grandchildren in Ohio and plans to spend the holidays there.

Looking back, she says she’s been surprised by how much Presbyterians have appreciated the work she’s done over the years.

“When you’re doing this, you don’t really think about it, but for the people who really need our service, they are so appreciative,” she said. “They’re like I just opened a whole new life for them. They tell me, ‘Oh, I didn’t know what to do and I’m so glad you helped me.’ This is what I do, but to them, it was a lifesaver.”

Scott spent her final week training her replacement and even though she knows it is time to step aside, she has mixed feelings.

“I said when I started that if I put in thirty years, I would leave. I have seen the church celebrate staff that have left after thirty years and I never thought I would be here that long,” she said. “I do want to go, but I don’t want to go. I’m still not sure what to do with myself after thirty years.”

Scott’s departure is being felt across the OGA.

“Wilma has served generations of pastors seeking calls. Whenever I mention Church Leadership Connection to mid council leaders, they all say how helpful Wilma has been over the years,” said Kerry Rice, deputy stated clerk with OGA. “She is patient with everyone — from those that just need a new password to those that are putting in a brand-new church information form.”

“Wilma and I have worked together since 1988 and she hasn’t changed over the years, she is a steadfast and unremovable person,” said Cindy Ealy, senior administrative assistant for OGA finance.

As Scott leaves the PC(USA), she has some words of advice for those who are just now answering the call to ministry.

Scott says it will be a challenge, but there is nothing more rewarding than working for the church.

“After a while, you feel that sense of calling that this is what the Lord told you to do and that makes it a lot easier,” she said. “You need to put your whole body and self into what you do. It’s not a job, it’s a calling. When you feel that, you look forward to coming in.”