Calls on Congress to lead the administration back on a path toward peace. 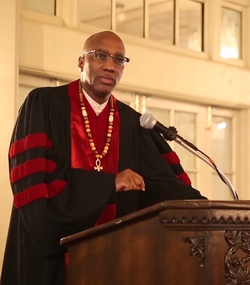 Lifting up the foundational importance of peacemaking to the Christian Gospel, Nelson expressed the importance of treaties as a pathway to peace, despite their imperfections. Nelson wrote, “While no international treaty is perfect, interim agreements such as this are essential to guiding the nations of the world toward peace rather than war.”

Noting concern for the withdrawal’s impact on the United States’ relationship with the agreement’s other signing nations, Nelson urged Congress to, “use their good offices to move the administration back into this partnership …”

The full text of Nelson’s statement:

Peacemaking is at the heart of the Christian Gospel, and it is intended to guide us as citizens to advocate and work for peace in our own nation and around the world. As a denomination, we have supported the framing of international treaties whose purpose is to make the world safer for all its citizens. Treaties are most effective when they involve the largest possible number of nations agreeing to take specific measures to reduce risks of war. The Iran Nuclear deal is such an example, in that it involves not only Iran and the United States, but also the United Kingdom, France, Germany, Russia, and China, all stewards of nuclear arsenals that are potential threats to our whole planet.

The potential for containment of Iran’s nuclear ambitions and the reduction of the potential for nuclear conflict has been severely jeopardized by the decision of President Donald Trump to withdraw the United States from the Iran Nuclear Treaty. This step has been taken in direct rejection of the counsel of the other members of the treaty and, in the eyes of many, under undue influence by Israel and Saudi Arabia, whose antipathy for Iran also contributes to the destabilization in the region.

The nuclear agreement with Iran, which will remain in place for the other signing nations, although made significantly weaker by the U.S. withdrawal, has seven strengths:

In withdrawing from the Iran agreement, the United States disregards the demonstrated values and effectiveness of this agreement thus far and offers no acceptable alternative beyond harsh rhetoric.

We urge members of the U.S. Congress to use their good offices to move the administration back into this partnership, to the end that the level of danger from nuclear proliferation is reduced, rather than increased. While no international treaty is perfect, interim agreements such as this are essential to guiding the nations of the world toward peace rather than war.