Leadership chosen for Hands and Feet initiative in Baltimore 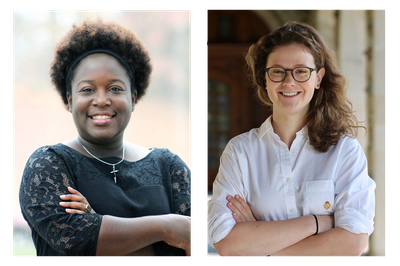 Two young women have been selected for the first yearlong fellowships with Hands and Feet, an initiative to strengthen mission efforts of the Presbyterian Church (U.S.A.) by encouraging partnerships and mission involvement with cities hosting the biennial meeting of the General Assembly.

The fellowships are being offered by Hands and Feet in partnership with The Center, a mission outreach of the Presbytery of Baltimore, host presbytery for the 224th General Assembly (2020). The Center hosts adult and youth mission teams from across the United States, offering them opportunities to engage in community service alongside churches and nonprofits in the Baltimore area.

New fellows Melva N. Lowry, a May 2018 graduate of Columbia Theological Seminary in Decatur, Georgia, and Olivia Holland Thomas, a May 2018 graduate of Rhodes College in Memphis, Tennessee, will serve from September 12, 2018, to August 15, 2019. They will help coordinate the activities of visiting groups, working with them in the community as well as leading them in Bible study and theological reflection.

Lowry is an elder at Rice Memorial Presbyterian Church in Atlanta and has worked in the admissions offices of both Columbia and McCormick Theological Seminary, where she earned an M.A. in discipleship development. She spent a summer working at Yellowstone National Park as a team leader for the Christian Ministry in the National Parks.

Thomas, who says her goal is a “career devoted to pursuing social equity,” is one of three fellows working with the Presbyterian Peace Fellowship at the 223rd General Assembly in St. Louis. She is beginning her third year of involvement with Evergreen Presbyterian Church, a small community committed to social justice work in the Memphis area.

“The fellows will serve as bridge people—or connectors—between our churches and those the mission teams are coming to serve,” says Kate Foster Conners, Director of The Center. They will help connect teams with opportunities to serve in urban, suburban, and rural areas throughout Baltimore Presbytery.

“This is really cross-cultural work,” Foster Connors adds. “People on the mission teams are coming from a wide variety of settings and communities and theological perspectives.” They may end up serving in a neighborhood that is very different from their own in terms of geography, culture, race, and economic status.

Foster Connors says Lowry and Thomas were selected, in part, because of their experience with diversity and their ability to play a teaching role—helping mission teams engage more deeply with the realities they encounter in the neighborhoods they serve.

“Both fellows are remarkably mature and have a depth of theological understanding, an ability to think outside the box, and a passion for justice,” she says.

The Rev. J. Herbert Nelson II, Stated Clerk of the General Assembly, says the Hands and Feet initiative enables Presbyterians participating in General Assemblies to contribute to the welfare of the host community. In addition to spending money in hotels, restaurants, and sightseeing venues, he explains, “we’re going in with hands and feet to do some work.”

The goal is that the General Assembly would “no longer just be a meeting that brings financial benefit to a community,” Nelson says, “but that it would bring a more lasting  impact.”

“Hands and Feet provides a perfect opportunity for Presbyterians across the country to participate in community engagement with our city, county, town, and rural congregations,” says Jacqueline Taylor, General Presbyter of the Presbytery of Baltimore. She hopes the new fellowship program will help expand the presbytery’s mission involvement and include congregations that have not yet had the opportunity to work with The Center.

She and Foster Connors would like to see The Center reach beyond the city of Baltimore and help more churches “discern how God is calling them to engage in their communities.” For example, a visiting mission team might provide the resources for a small rural congregation to organize a summer camp for area children.

“When we go to a congregation and say, ‘Hey, we have 20 volunteers coming,’ that may just give the congregation the impetus to take a risk,” Foster Connors explains.

She says The Center is already receiving inquiries from congregations across the country interested in sending mission teams to Baltimore next year. At least one of those congregations has been involved with Hands and Feet projects in St. Louis.