Home News Gather at the river

Gather at the river

The 223rd General Assembly of the Presbyterian Church (U.S.A.) convened Saturday with an opening worship service buoyant with music and prayer and punctuated with calls for community-based acts of social witness.

Befitting its “River City” location, the liturgy, hymns and sermons shared a leitmotif of water: The Gathering Words, Prayer of Invocation and Thanksgiving, Call to Confession, Assurance of Forgiveness and Anthem — “Shall We Gather at the River?” — referenced water’s potential to baptize, wash, destroy, sustain and renew. 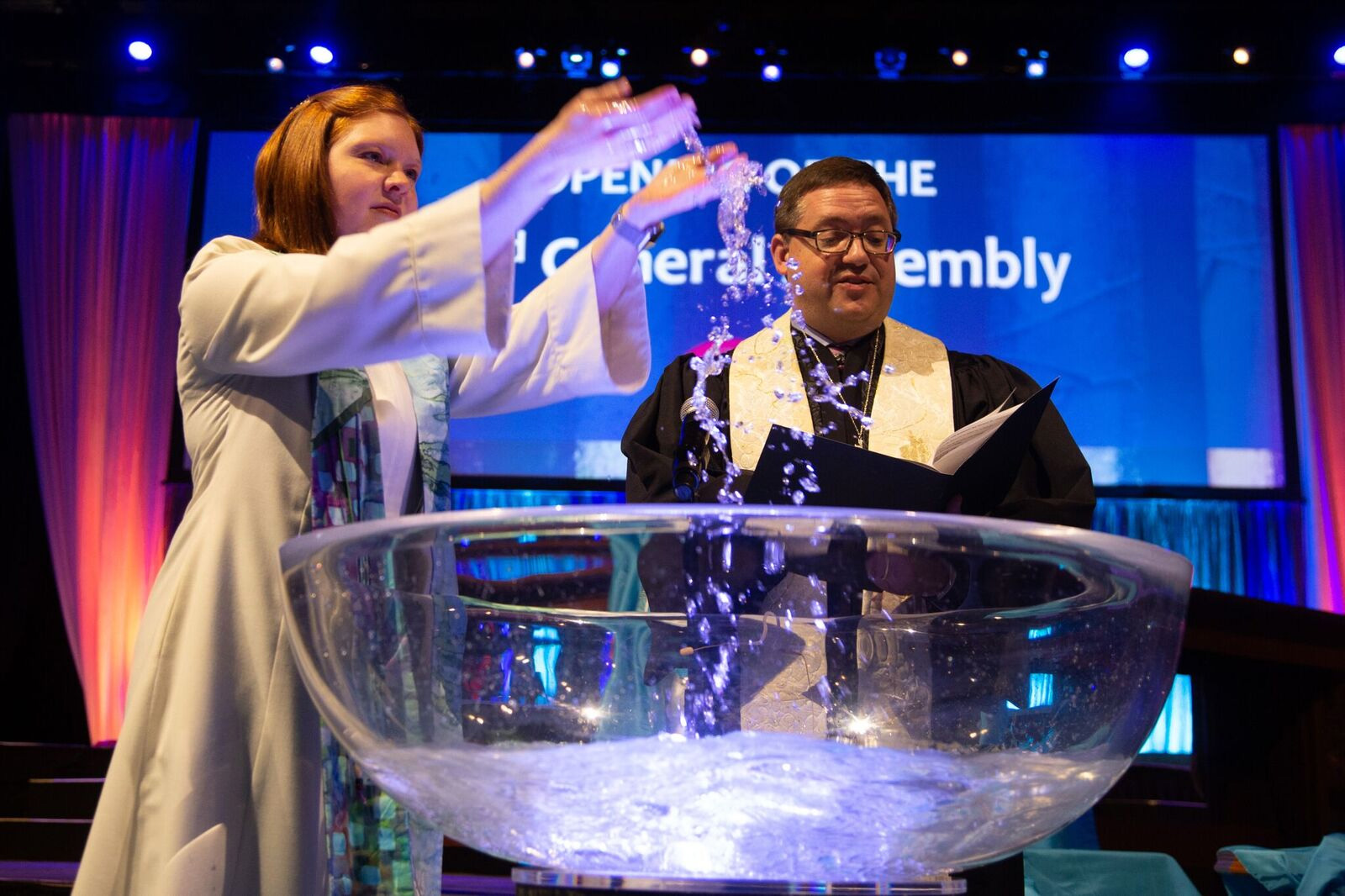 A Prayer of Illumination by Annie Dowell of Ladue Chapel Presbyterian Church in Missouri referenced the nearby Mississippi. The Jordan and Euphrates rivers mentioned in the service’s Old Testament Lesson gave the Presbyterian Church (U.S.A.)’s Co-moderators, the Revs. Jan Edmiston and Denise T. Anderson a theme for discussions of PC(USA) support for oppressed peoples in today’s Middle East, the United States and other parts of the world.

The co-moderators delivered a co-sermon, their last together after two years in that role. A new moderator/co-moderators would be elected later in the day.

“The world feels angrier and meaner than it did two years ago,” Rev. Edmiston said. 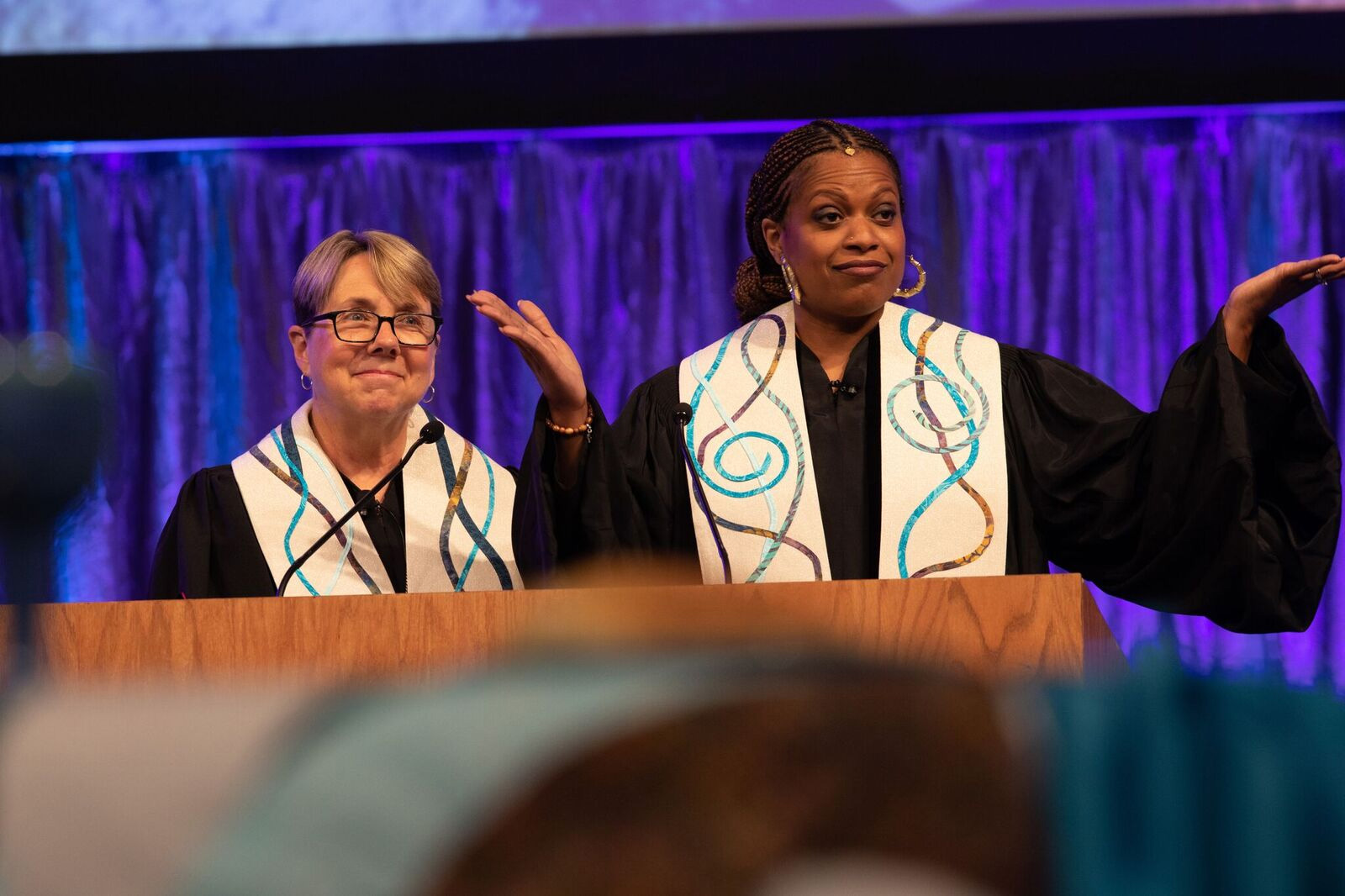 “We are sorting ourselves into like-minded groups of people who look just like us,” Rev. Anderson said. “Our nation will only thrive if we embrace all kinds of diversity.”

“God calls on us to be successful by being rich in wisdom, understanding,” Rev. Anderson later said, prompting Edmiston to joke, “So much for the prosperity gospel!”

Just as the co-moderators used a polyphonic sermon style, the service music allowed for a fluid interplay of voices. A performance of “Halleluya! Our God is God” included a stirring call-and-response between worshipers and the Assembly Choir, composed of members of congregations from the Presbytery of Giddings-Lovejoy and directed by Bill Stein of First Presbyterian Church in Kirkwood, Mo.

Stated Clerk the Rev. J. Herbert Nelson, II, led the Lord’s Prayer and an Invitation to Offering, asking Assembly participants to give money for bail relief. The offerings will be delivered during a silent march to the St. Louis City Justice Center.

“As we seek to be bold,” the Nelson said, “following the example of Jesus Christ, to walk by faith and not by sight . . . Today’s offering and the monies we’ve collected will be used to help release captives here in St. Louis, those held in prison without a chance to argue their case because they can’t pay bail.”

The co-moderators returned to the pulpit for a communion service, pouring wine from a jug similar to those used earlier in the service to decant water into the font. During the blessing, Anderson said, “We are drenched and fed and changed.”

The hymn “Come Sing, O Church, in Joy!” ended the service, instructing GA223 with its last line to, “Celebrate the journey now and praise the Lord.”