A foretaste of fractious fighting

Reports propose new ways of being the church 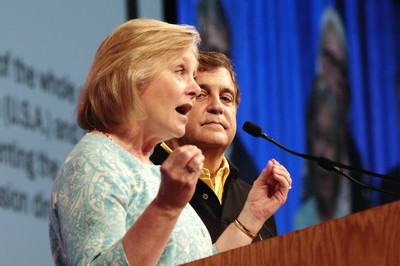 The Rev. Deborah Block, moderator of the All Agency Review Committee and the Rev. Mark Hostetter, moderator of The Way Forward Commission, speak to commissioners Sunday. —Danny Bolin

Commissioners to the 223rd General Assembly learned Sunday just how difficult their task will be later this week when they will vote on two significant proposals for changing the way the denomination is governed.

The Way Forward Commission, the All-Agency Review Committee and the less controversial 2020 Vision Team – all created by the 222nd General Assembly (2016) presented highlights of their proposals during a plenary session Sunday afternoon in which the Rev. J. Herbert Nelson, II, stated clerk of the General Assembly, said the status quo is no longer viable.

“I want to contend today that we cannot serve God by building up until we tear down the bridling paradigm of the current state of our faith,” Nelson told commissioners. “The world has changed around us and we have been slow, and in some instances, reluctant to adjust, transition and engage in transformative change.”

Presenting together, the Way Forward and All Agency Review groups laid out their tasks in stark terms: “What does it mean to say yes to some opportunities and no to others?” asked the Rev. Debra Avery of the All Agency group. “What do we need to celebrate and release, and celebrate and support?”

The Way Forward Commission developed four top-level goals, said the Rev. Mark Hostetter, the group’s moderator. He introduced other members of the commission, who spoke to those goals:

The Rev. Deborah Block, the All Agency moderator, said the two groups “early on formed joint working groups to address areas of common concerns. We issued separate reports with some distinct recommendations and some unanimous joint recommendations … We did our work with deep commitment to the future of the PC(USA) and an acute awareness of present realities.”

“We were interested in the Great Ends of the Church,” she said with a smile, “because, hey – they’re great.”