Presbyterian clergywomen honored for their efforts to challenge racism and oppression 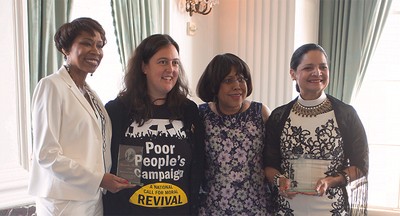 Three outstanding Presbyterian clergywomen who are “woke” were honored for their determined efforts to challenge systemic racism and oppression during today’s Women of Faith Awards Breakfast at the 223rd General Assembly (2018) of the Presbyterian Church (U.S.A.) in St. Louis.

The PC(USA)’s Racial Ethnic & Women’s Ministries  recognized the three clergywomen for their work for transformative change and their efforts to end racism and injustice. The 2018 Women of Faith honorees are:

Barbee stood between protestors and policemen along with other ecumenical colleagues all wearing clergy collars, the night Keith Scott, a 43-year-old African American man, was killed by police in Charlotte. The shooting prompted both peaceful protests and violent riots in Charlotte over two nights.

Barbee acknowledges she does not stand by herself, but with others in the fight for justice. “As a child I was called a bully, as an adult I’ve been called a bully, and I will admit, I am a bully for Christ.” Barbee said we must all participate in the fight for justice and equality. “We cannot and must not sit in silence, that would be unjust,” she said. “I will stop when I die!”

In an inspiring Father’s Day tribute, Hernandez-Granzen said, “I am a woman of faith and a Presbyterian because of my father.”  Her father, a Pentecostal pastor in Brooklyn, N.Y. in the 1950s and 60’s, was a pioneer in wholistic ministry. “It is because of my father’s work with the poor and oppressed and his legacy that I became an ordained minister,” she said.  Hernandez-Granzen closed her remarks with a familiar Latino rally call: “La vida es la lucha” (“The work continues!”).

Theoharis has spent the last two decades with grassroots, community-led anti-poverty organizations working to put an end to poverty in this country. She is co-founder, with the Rev. William Barber, of The New Poor People’s Campaign.

“This Presbyterian Church has been my home my whole life,” said Theoharis. Reading Isaiah 58 from The Message version of the Bible, she said, “We are called to repair those breeches and repair the street and to make God’s community livable for all.” “This scripture is often used in the work for justice,” she said. “We know that we are called to do this work and God wants justice for all and that so comforting to know that in our struggle God is with us.”