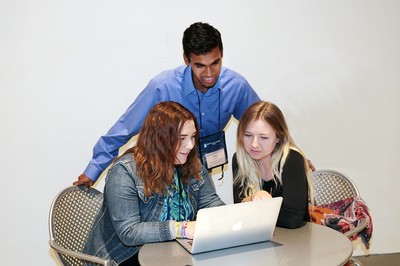 From left to right: Jacqueline Laybourn, Walter Manual and Sophia Alecci hope a resolution they worked on seeking full moderator voting rights for YAADs makes it to plenary at General Assembly 223. —Photo by: Danny Bolin

After Saturday night’s moderator vote at the 223rd General Assembly of the Presbyterian Church (U.S.A.) young adult advisory delegates (YAAD) gathered in their home groups to share how their experience went.

“We heard commissioners say, ‘we don’t have to listen to you,’” said Flint River YAAD, Lily Ingle.  “You’re just children.”

Immediately six YAAD’s — and a theological student advisory delegate (TSASD) began writing a resolution for YAAD’s to have a full moderator election voting rights. The resolution — which was signed by two commissioners — will be debated in the GA in committee 3 GA Procedures Tuesday. YAAD’s are hopeful they get can get it out of committee to plenary for a full commissioner vote.

Jacqueline Laybourn, YAAD from Sacramento Presbytery spent 13 hours working on the resolution draft. It was important to her personally, because she feels “God calls us to listen to youth.”

San Gabriel Presbytery YAAD Sophia Alecci says YAAD’s are 100 percent supportive of the moderators the commissioners elected — even though nearly 98 percent of them recommended that commissioners vote for Rev. Elina Maxim of Seattle Presbytery and Rev. Bertram Johnson of New York City Presbytery, who finished second in the contest.

“We’re doing this because we felt like we were not being heard by the commissioners,” says Alecci.

“We’re reduced to a 10-second bar chart display,” adds YAAD Corrine Burch of The James Presbytery, “and then it disappears and you get the real vote,”

While they appreciate having a vote in committee, thereby feeling like they are influencing what gets to plenary, YAAD’s would like to also have a vote in the moderator’s contest, because they set the vision for the whole church.

“We’ve seen a decline in membership in the PC(USA),” says Walter Manual from Southern New England Presbytery. “So, let’s turn that around starting with our generation — let us have a vote for moderators.”