David Meeks, a high school student from Charlotte, N.C., aims a drill at the side of a wood bunk he’s been assembling at Mission St. Louis, a nonprofit serving impoverished neighborhoods in the city.

“Need a quote, too?” Meek asks, pretending to strike a pose. A yellow bandana tied around his head keeps sweat from falling in his eyes. He is one of 12 students from the Sardis Presbyterian Church participating in a service/learning project sponsored by the Hands and Feet Initiative. 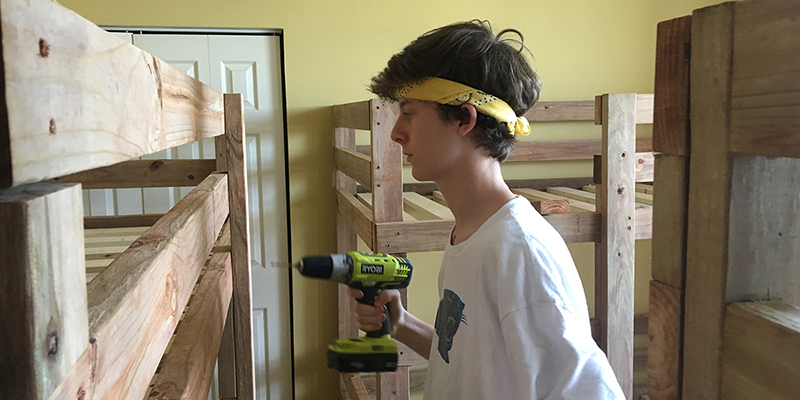 David Meeks of Sardis Presbyterian Church in Charlotte puts together bunk beds for the church’s Hands and Feet project. (Photo by Chris Keating)

Working alongside 28 youth from the Presbytery of Eastern Virginia, the students are involved in an urban mission experience organized by Oak Hill Presbyterian Church’s Amen House ministry. Amen House’s program  — “A Ministry Embracing the Neighborhood” — combines hands-on service opportunities and educational seminars on community issues in St. Louis, including “sacred conversations on race.”

Those conversations are critical, says Korla Masters, interim director of AMEN House. “We want to have groups working in areas of acute need,” she says, “but we also want the groups to know why those needs exist.” 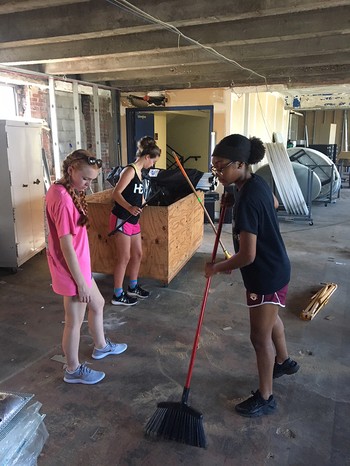 Young volunteers help clean up a work site as part of their Hands and Feet experience at Amen House in St. Louis. —Photo by Chris Keating.

“We explore the current reality of housing segregation in St. Louis, dig into its roots here and nationally.” The format, developed by an ecumenical partnership in St. Louis — Metropolitan Congregations United — following the death of Michael Brown in nearby Ferguson in 2014, has been used by congregations across the area. Masters says groups leave St. Louis ready to make a difference in their hometowns.

Masters says the Hands and Feet initiative has prompted an uptick in groups contacting AMEN House to book stays this summer. The project will host a group a week throughout the summer, in addition to 10 groups that visited during the 2017-18 school year.

The groups will also take part in a city-wide clean up effort and the General Assembly’s act of public witness on Tuesday.

“We’re excited to be here as part of the Hands and Feet effort,” says Adrian Martin, director of youth ministries at Sardis Presbyterian. “It’s not just a mission project. We’re part of something bigger.”