50th anniversary of assassination is ‘a timely opportunity to affirm’ MLK Jr. 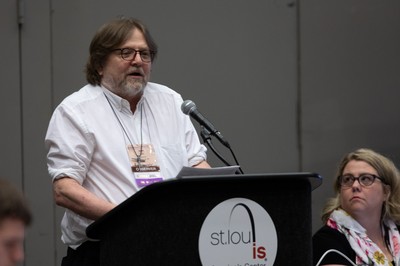 Committee 14 of the General Assembly adopted a motion urging the inclusion of Rev. Martin Luther King Jr.’s “Letter from Birmingham City Jail” to the Book of Confessions.

King wrote the letter, dated April 16, 1963, while jailed in Birmingham, Ala., for leading a protest march without a permit. He wrote the letter, now considered a classic of world literature, on the margins of newspapers and the backs of legal papers, and had his lawyers smuggle it out of the jail. In it, he defended the philosophy of nonviolent demonstration in the face of injustice and argued that citizens have “not only a legal but a moral responsibility to disobey unjust laws.”

The letter was written as a response to eight white clergymen who had denounced King as a troublemaker and an outsider.

The committee’s entire evening session was devoted to Item 14-05, “On Adopting the ‘Letter from Birmingham City Jail,’ written by the Rev. Dr. MLK Jr., as a Contemporary Statement of Faith (But not with Constitutional Standing).”

During the open meeting, the Rev. Dean Seal, overture advocate from the Presbytery of Twin Cities, said that the 50th anniversary of the assassination of MLK Jr. is “a timely opportunity to affirm him,” and noted that the letter has “efficacy for motivating young people to learn about the Civil Rights Movement,” a point affirmed by several other speakers.

The initial motion, offered by Teaching Elder Commissioner Erin Hayes-Cook of Elizabeth Presbytery, called for the GA to recognize Dr. King’s letter as a statement of faith and of the to begin the process outlined in G.603 of the Book of Order to include it in the Book of Confessions. Her motion was later expanded by Ruling Elder Commissioner Sandy Zeles, Chicago Presbytery, as an alternate urging that GA commend the letter as a resource that provides prophetic witness that inspires, challenges, and educates both church and world.”

The financial implications of the motion would be about $60,000 for a committee of 15 to meet twice a year for two years, or $30,000 for one meeting per year.

The way I would express the importance of (the letter) to them is to say that if it would be in my purview, it would be in Scripture ― with Robert Frost,” he said. “I’m grateful to have lived long enough to be a part of this. And beware — if this passes, I’ll be back with the Frost.”

The committee’s morning session began with a protracted debate on Item 14-07 — “To Approve New Trustees Elected by PC(USA) Theological Institutions.”

The committee, moderated by Teaching Elder Commissioner Anne Apple of Mid-South Presbytery, concluded its scheduled business slightly ahead of schedule.

A series of motions and proposed amendments to the recommendation from the Committee on Theological Education (COTE) ultimately was approved, with comment.

The comment was the product of a lengthy discussion started by a motion from Ruling Elder Commissioner Jo Ann Kauffman of the Presbytery of Inland Northwest, a member of the Nez-Perce Tribe. It called for COTE to encourage its member theological institutions to actively recruit Native American and Hispanic members for their boards. It was eventually expanded to include “other underrepresented communities” and to call for equal gender representation.

During the debate, Committee members heard from the Rev. Tom Trinidad, chair of COTE, and the Rev. Dr. Ted Wardlaw, president of Austin Presbyterian Theological Seminary. Trinidad observed that COTE’s member institutions “are independent — governed by their own by-laws” and “ have likely received counsel that it is in their interest to diversify their boards.”

Wardlaw expressed gratitude for the committee’s “passion for diversity,” while emphasizing that these boards are primarily oriented to development. “We need donors and leaders on our board to help us to remain financially viable,” he said.